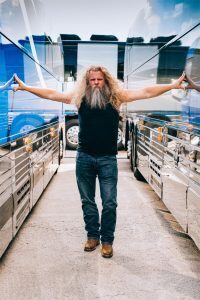 UPDATE: “Jamey Johnson with Whiskey Myers at the North Charleston Performing Arts Center on 5/6 has been rescheduled to 10/22. Your ticket will be honored for the rescheduled date. For any further ticket inquiries please reach out to point of purchase.”

Platinum-selling singer/songwriter Jamey Johnson will play the North Charleston Performing Arts Center on May 6th with special guests Whiskey Myers. Tickets go on sale Friday, February 28th at 10 am at Ticketmaster.com, LiveNation.com and via the Live Nation app.

The Washington Post considers Johnson to be “one of the greatest country singers of our time.”  Since he doesn’t create a set list, no two shows are the same, so the once-in-a-lifetime concert will be unforgettable.

His 2008 album, That Lonesome Song, was certified platinum, and his 2010 double album, The Guitar Song, received a gold certification. He has also been nominated for 11 Grammys.

In addition, he won two Song of the Year Trophies, for “Give It Away” and “In Color,” both from the Academy of Country Music and the Country Music Association. He has received praise from The New York Times, Rolling Stone, The Wall Street Journal and several other publications.

For more information or to purchase tickets to Johnson’s North Charleston show, go to LiveNation.com or Ticketmaster.com.
–

Scary Mommy Coming to the Gaillard Center on June 26th