Coffee shops in the greater Charleston area are a dime a dozen, with the national chain setting up every few miles. The only way independents in the Holy City can set themselves apart is by being a ‘cup above,’ or in the case of Brukes, maybe it’s percolating (pun intended) to a fresh brewed sound.

While the name might appear funny, when you wake up and smell the coffee, it’s really rather original. Owner and sometime operator Chris Bluemel blended his love for coffee and music, by taking the first two letters from brew and the first three letters from ukulele and voilà (wah-lah) Brukes magically appeared.

A former US Army musician (tuba), Bluemel founded Southern String Supply (formerly The Instrument Doc) in 1999, and he and his Mount Pleasant instrument shop have been a fixture in the low country for over 20 years. When not selling or repairing instruments he can be found performing with the Charleston Symphony Orchestra or a similar group on Hilton Head. But enough about his accolades.

Bluemel’s passion is well displayed at Brukes (formerly Sojourn Coffee) at 1664-D Old Towne Road in West Ashley. The aroma and the overall décor’ provide an inviting atmosphere. The walls are beautifully arrayed with a variety of ukuleles, with a few choice violins and the occasional guitar. All the instruments are for sale. 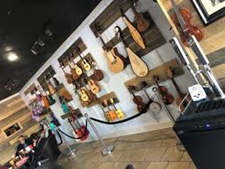 While musical instruments allow for a unique ambiance, it is the coffee bean brews and the tasty bites that have food & drink lovers buzzing. Think neighborhood coffee shop meets palmetto state country café’, and you have the general concept at Brukes. Great ‘cups of joe’ alongside awesome handheld edibles, soups, quiche, sweet treats, Cirsea Ice Cream and ‘craft your own hominy grits creations’.

Keeping it local Brukes blends your favorite coffee concoctions from beans ground from King Bean and Camino Coffee Roasters, both known for artisan blends and green coffees, with both roasters giving a portion of their profits to charities and grassroots NGOs (non-government organizations). That makes coffee taste even better.

If you crave European, African, and South American coffee blends, than Brukes more than satisfies. Their menu of ‘classical music coffees’ celebrate some of the greatest composers and operas of all time. Enjoy a Latte by Verdi, or the Puccini Cappuccino, almost as good as the Verdi, with the Aida a slightly flavored Verdi.

If you prefer your roasted beans iced than The Tschaikowsky is an ideal cold brew. Order you cold brew nitro infused and you’ll be sipping on the Bruckner, named for the 19th century Austrian composer Josef Anton Bruckner. Over a dozen signature brews on the bill of fare, with the Tan Dun the lone hot tea saluting the Chinese contemporary classical composer. Seems only fitting.

The breakfast and midday sandwiches are equally alluring, all on your choice of whole grain breads, bagels, or English muffins. A fresh bagel topped with sausage, egg, provolone, tomato, and their homemade ‘ah!-andaise sauce makes a nice ‘wake me up light bite’, ideal with an intoxicating hot or cold brewed cup of joe.

What further sets Brukes apart is their Harmony Hominy listings which pays homage to authentic grits. Vegans and those gluten or lactose free can dine on the hominy straight up, or for no extra charge diners can spice their grits up with a variety of cheeses, seven different milks, or either of their house made BBQ or Thai chili sesame oil. Now we’re really waking the palate up! Add bacon, shrimp, or bratwurst for some protein.

Maybe it’s mid morning or early afternoon and you just want a quick pick me up or dropped in to satisfy your sweet tooth. Try a thick shake, perhaps some vanilla bean Cirsea Ice Cream or Strawberry Goat Cheese. Or if you really want to go big, than for $6 get the Fagotto Affogoto, aka a heavenly Italian espresso with ice cream. Magnifico!

You don’t even need to bring your gold credit card or search for spare change in your sofa when heading to Brukes. Most sandwiches including soup of the day and Sweet Lorraine Quiche all under $6. Grab a bowl of grits for $5. And while others overcharge for fresh brewed coffees, Brukes are all under $4 except for Chai Latte. Great coffee and savory food without denting your wallet always taste good.

While Brukes has been operating for a few months in the Orange Grove location of West Ashley, they are still creating the overall symphony that will become a coffee house slash music experience. Bluemel promises a well adorned patio as well as a fenced doggie park (already in the works), for coffee lovers furry friends.

Brukes has the yesteryear feel of a hip coffee shop where burgeoning singer songwriters and poets cut their teeth like in neighborhoods in New York’s east village. Channeling that concept, Bluemel soon plans to open Brukes to performers who want to showcase their talents. Can you dig it, I ‘m certain you can.

If you’re in West Ashley near the intersection of Sam Rittenberg and Old Towne Road, then you’re just a few coffee cups away from Brukes. Find them officially at 1664-D Old Towne Road. If you’re without GPS than call 843-225-9091 or follow them on Facebook at https://www.facebook.com/brukescoffeeandmusic/