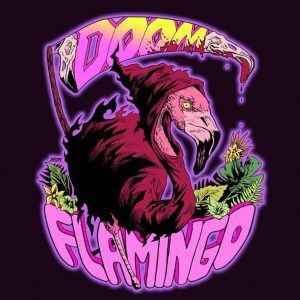 Live-electronic trio Nobide has collaborated with Charleston’s Doom Flamingo on a remix of the latter’s single, “Telepathy.” As Doom Flamingo keyboardist Ross Bogan explains, the intention for the original version of “Telepathy” was simple in that, “We just want to make people dance. It’s a ritual.” In that light, Nobide hit the nail on the head with their “Telepathy” remix, weaving a new EDM identity into the song’s DNA. You can stream the track on Spotify here.
Doom Flamingo is the rising Charleston-based synthwave sextet featuring Umphrey’s McGee bassist Ryan Stasik.
The release of “Telepathy” comes in advance of the eponymous double EP that Doom Flamingo will release in 2020. The first EP will be titled DOOM, followed shortly by its counterpart, FLAMINGO. The first release is loosely categorized by the band as “party horror music” with heavy metal ballads. FLAMINGO, the second EP, will vibe more towards “80’s guilty pleasures.”
Doom Flamingo initially recorded “Telepathy” at Charleston’s Rialto Row with producer Wolfgang Zimmerman during an inspired 2018 session that went on to produce five tracks in two days. The original mix was entrusted to Nashville-based producer/Umphrey’s McGee collaborator Greg Magers before the stems were sent to Nobide for remixing, and eventually to Colorado-engineer Brad Smalling for remix mastering.
Part of what drew Nobide to the original version of “Telepathy” was the ferocity of Doom Flamingo’s vocalist and frontwoman, Kanika Moore.
“My favorite part of the track has to be the vocal manipulation,” Nobide’s Nick Vann said. “Kanika is such a powerful singer and to be able to mess with her performance…too much fun. I tried not to alter it too much, but give it a more electronic and experimental twist.”
“The marriage of styles and ideas is seamless,” Doom Flamingo saxophonist Mike Quinn said. “Nobide nailed it, taking this song to another planet while keeping its essence intact. The increase in tempo certainly places it in a different part of your day, but that’s the exciting part, it now exists in two places in my mind.”
For more information on Doom Flamingo and their upcoming EP releases, visit https://www.doomflamingo.com.