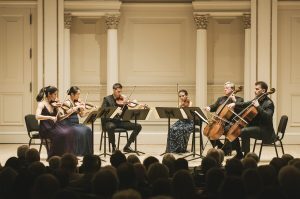 Violinist Anthea Kreston, former member of the internationally renowned Artemis String Quartet, has returned to the United States to continue her solo and chamber music career.  As a member of the Artemis String Quartet she enjoyed a robust concert schedule with regular appearances at major concert halls in Europe and the United States. The Artemis Quartet’s recording of Shostakovich’s String Quartets received the prestigious Diapason D’Or (the highest French honor for a recording) and the quartet is featured in the German documentary “The Neverending Quartet,” which is currently making its debut across Europe.  Anthea has received numerous awards for her chamber collaborations, including the grand prize at the Concert Artists Guild Competition and Europe’s Echo Award for recording.  Ms. Kreston made her solo debut at the Kennedy Center in Washington, D.C., and continues to tour with the Amelia Piano Trio. She has also toured with Yo-Yo Ma’s Silk Road Project, and has been recognized by Chamber Music America for her groundbreaking work with abuse survivors and people with AIDS.

Cellist Jason Duckles has an active life as a soloist and chamber musician. He has received numerous awards for his chamber collaboration, such as grand prize in the Concert Artists Guild Competition and top prize in the Munich ARD International Competition. Jason is a founding member of the Amelia Piano Trio, the Milwaukee String Quartet, and East Meets West, a quintet that explores the cross-influence of Asian and Western music. He has also been a member of the Avalon String Quartet and the Aspen Contemporary Ensemble, and has appeared frequently as the cellist for the Mark Morris Dance Group which tours throughout the United States and Europe. Dedicated to music of our time, Jason has commissioned works from many composers, including Pulitzer Prize Winner John Harbison and Augusta Read Thomas. He has collaborated with artists such as Ida Kavafian, Lucy Shelton, Gilbert Kalish, and Phil Setzer, and can be heard on the labels New Tangent, Channel Classics, Koch, Global Crossings, and Cedille Records.

Tickets for Ovation Concert are $5 for students and parents, $20 for seniors and $25-$50 for general admission. Guests who purchase section A tickets ($50) are invited to a special post-concert reception with the performing musicians.  For more information and to purchase tickets, please visit www.chambermusiccharleston.org or call 843-763-4941.

Follow us
Related Topics:Anthea KrestonCathedral Church of St. Luke and St. PaulChamber Music Charleston
Up Next

ABBA The Concert Host Dance Party At The PAC