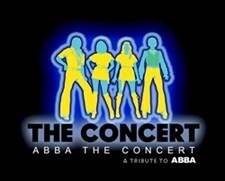 While the four original members of the super pop group ABBA haven’t performed together for over 35 years, their music has lived on, especially since the musical ‘Mamma Mia’ debuted over two decades (1999) ago. With many in the world anxious to experience ABBA, many tribute bands have emerged over the years, but none more recognized than ABBA The Concert : A Tribute To ABBA, who rocked the North Charleston Performing Arts Center Friday (Feb 21st) night.

It’s been said nothing can compare to the original but ABBA The Concert is as close as ABBA fans can get to the real thing. A near sell out crowd filled the PAC ready to revisit the 1970’s and some of best music ever to come from Top 40 radio. ABBA The Concert did not disappoint, offering up more than a dozen familiar songs wrapped around a few rare gems. But as the band members indicated, Friday night in Charleston was meant to be a Swedish Dance Party, and audience members had a hard time staying in their seats.

Complete with a six piece backing band, the four acting members of ABBA The Concert hosted two hours of non-stop fun. As the guys played guitar and keyboards, the ladies sang, danced and frolicked with unfettered abandon, using the stage as their invite to the musical celebration. Dressed in period attire made the overall experience that more memorable. 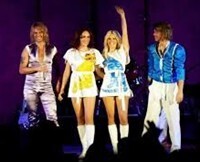 The show opened with ‘On and On and On’ and the dance party was just kicking into gear. Crowd favorite ‘Knowing Me, Knowing You’ was a nice lead into the softer ballads ‘Chiquitita’, ‘I Have A Dream’, and ‘I’ve Been Waiting For You’. A nice dancing in the aisles party broke out with ‘Waterloo’ and ended on ‘Mamma Mia’, with a sweet cover of SOS sung partly in Swedish offered between the mix.

After a short recess the main performers returned clad in new costumes with the ladies sporting a noticeable V pattern which was a nice intro to ‘Voulez-Vous’ and an ideal way to say ‘do you want’ to keep the dance party going? ‘Fernando’ and ‘The Name of the Game’, and ‘The Winner Takes It All’ proved the ladies can offer up softer notes with soulful reflection.

Heading into the home stretch, ‘Super Trouper’ kept the crowd on their feet thru the finish line. The performers invited fans to join in on ‘Does Your Mother Know’ followed by an epic drum solo. With that the guys thanked ABBA fans young and old, teasing the crowd they had no more to offer, except maybe one more song.

With the crowd chanting ‘Dancing Queen’ the ladies re-emerged in new silks as the PAC erupted into a full blown karaoke bar, with audience members getting their grooves on. ABBA’s most recognizable hit brings back memories of bell bottom pants, polyester suits, and disco balls, with no one in their seats and ‘Peace, Love, & ABBA’ musically flowing thru the air.

Before those making early exits could reach the doors ABBA The Concert returned for ‘Thank You For The Music’ which seems only a fitting number to close the show on. For over a decade ABBA gave the world some of the most time honored pop songs, and Charleston fans were more than happy to relive the magic even thru a tribute band. Many ABBA fans took their ABBA The Concert experience to the next level by donning 70’s era wardrobe. You’re never to old to sing and dance.

Follow us
Related Topics:ABBA the Concertnorth charleston performing arts center
Up Next

3 Secrets to Get Discount Tickets for Dear Evan Hansen Musical