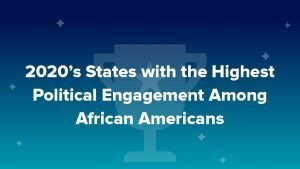 Personal finance website WalletHub recently released its report on 2020’s States with the Highest Political Engagement Among African Americans and South Carolina checked in at No. 3 on the list.


To determine where black Americans are most engaged in the political process, WalletHub compared 49 states across six key metrics. They include black voter turnout and registration during the most recent midterm and presidential elections as well as the proportional representation of blacks in the state legislature and national party conventions.