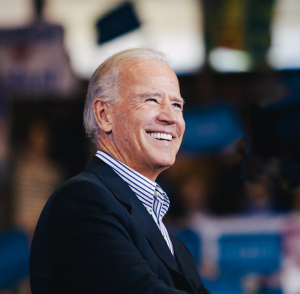 The Bully Pulpit Series at the College of Charleston will host Democratic presidential candidate Joe Biden for a community event on Monday, Februrary 24th, 2020. The event, which is free and open to the public, will take place in the F. Mitchell Johnson Physical Education Center at 30 George St. at 7:15 pm.

Biden graduated from the University of Delaware before receiving his law degree from Syracuse University. He was first elected to the U.S. Senate from Delaware in 1972, when he became the sixth-youngest senator in American history. Biden was re-elected to the Senate six times. In 2008, Biden was the running mate of Democratic presidential nominee Barack Obama. After the election, Biden served as the 47th vice president of the United States from 2009 to 2017. On January 12th, 2017, Obama awarded Biden the Presidential Medal of Freedom for his lifetime of public service.

The mission of the Bully Pulpit Series is to encourage and facilitate political participation throughout the College of Charleston community by providing a platform for dialogue with our nation’s leaders. At its core, the series engages today’s youth by meeting students where they are – in the classroom, outside their residence halls and through their social networks – to create curious, informed and engaged individuals who are ready and able to engender political and social change. Originally created in 2008 to highlight the communication powers of the political pulpit, the mission of the series has expanded as a result of increased student and community interest and engagement