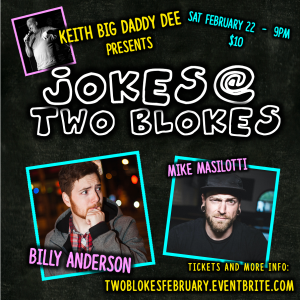 Coming off its fourth sold out show, “Jokes at Two Blokes” returns to the Mount Pleasant brewery on Saturday, February 22nd at 9 pm.

Los Angeles comedian Billy Anderson moved to the West Coast from his home state of Georgia in 2012 to become a comedian. With his new bi-coastal point of view, he went on to perform in all 50 states in only 48 days on his first tour.

His act can be heard on Audible and SiriusXM, and in 2017 he made his television premiere on Fox’s Laughs. Anderson released his debut comedy special America’s Sweetheart in 2018 through Amazon Prime.

Follow us
Related Topics:Jokes at Two BlokesTwo Blokes Brewing
Up Next