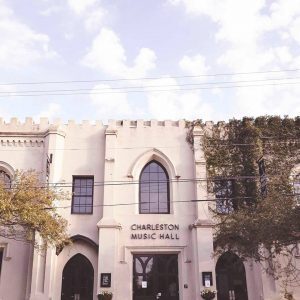 The Charleston Music Hall this week announced that owner Bennett Hospitality has signed an operations agreement for the venue with longtime partners Frank Productions & National Shows 2 (NS2). The CMH Team is thrilled about this merger that will give added support and resources for the staff, as well as growth for the venue.

Bennett Hospitality built and opened The Charleston Music Hall in 1995 transforming an old train station from 1850 into a state-of-the-art concert facility. Bennett Hospitality hired Charles Carmody as Executive Director in 2012, and gave the support needed to make the Music Hall what it is today: a world class entertainment facility that holds over 250 events a year.

NS2 is a Nashville-based, full-service concert promotion company that is part of Frank Productions’ national operations. NS2 creates, produces and promotes live entertainment events in arenas, amphitheaters, performing arts centers, clubs and other venues across the country. NS2 has exclusively booked the Music Hall for the past six years.

Under this new agreement, Frank Productions and NS2 plan to increase the number and diversify the type of shows at Charleston Music Hall by modifying the current seating configuration. Beginning in early April 2020, Sections A and B on the main floor of the Hall will be outfitted with state-of-the-art removable seating. This will allow the Charleston Music Hall to host assigned seating shows, general admission (GA) shows with an open-floor area, and a combination of the two (first floor GA and balcony assigned seating). Seats in sections C Rear, D Rear, E Rear, and the entire balcony will not be removable and will remain in place for all shows.

“This agreement solidifies our commitment to connecting artists with fans in the Charleston market, and primes us for our next steps in expanding the NS2 footprint in South Carolina,” adds NS2 President Darin Lashinsky.

“The Charleston Music Hall Team is thrilled to be syncing up with NS2 and Frank Productions. The Hall is still dedicated to producing high quality local and regional content, and we are excited about the opportunities this joint venture will create to bring new and exciting national tours to Charleston,” said Charles Carmody, Venue Director of Charleston Music Hall.

Report: Charleston Has the 7th Biggest Drinking Problem in the U.S.