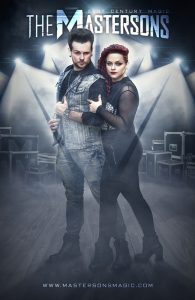 National touring illusionist duo The Mastersons will visit Holy City Magic next month. The pair will be performing the adults-only evening shows on March 6th and 7th starting at 8 pm and a family matinee on March 7th at 1 pm.

Reed and Ashton Masterson are award-winning illusionists who bring a whole new meaning to the term “Magic Show.” With their signature rockstar style, and larger than life personalities in high demand, this pair spends more time on stage than off.

Since the couple’s first show together in October 2008, they have been seen live by over 100,000 people spanning 46 states. They’ve performed for numerous celebrities, have been featured on ABC, FOX, NBC, CBS, THE CW, and just recently performed for a studio audience of 1,000 during the filming of an A&E television special.

Tickets are on sale now. For more information, visit www.HolyCityMagic.com.

“Why Is the Sky Blue?” Group Exhibition Opens at Meyer Vogl Gallery on March 6