He’s been nicknamed ‘The Man With A Thousand Voices’, and more than six decades after he began his journey as one of worlds greatest impressionists, Rich Little is still performing regularly in Las Vegas and weekend shows throughout North America. While he does do impressions of many entertainment icons, he says the nickname is a little too generous.

“That sounds good, but no one can do that many voices. I’m not sure how many voices I’ve actually done over the years, or have inside me, but I do about 70 or 80 really well, and those are the ones I focus on.”

81 years young the Canadian native who first start mimicking well known Canadian politicians as a teenager, says there is no reason to slow down. Little recognized his innate ability at an early age, and began to hone the craft while working as an movie usher in Ottawa.

“I was a great fan of movies when I was younger. I seemed to identify with the characters so I just started imitating them. But when I realized I had this gift, I began impersonating my teachers. I did their voices. They would ask me a question, and I’d answer back in their own voice. It would get a few laughs, but usually I gave the teacher the wrong answer.”

By the early 1960’s he was working a disc jockey during the day and entertaining in clubs at night. That lead to work south of the border. Crooner Mel Torme asked Little to audition for a new variety show he was producing for Judy Garland, and before he knew it the then 25 year old Little made his national TV debut. The year was 1964. 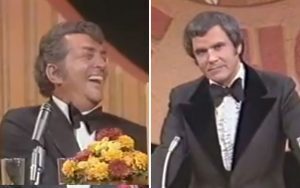 Hardly any of ‘Dean Martin’s Celebrity Roasts’ would be complete without Little as a fellow roaster. Little’s comic wit and timing only added to the all-star panel. “I did 25 of the roasts. They were terrific, and extremely popular. Celebrities loved to be on the roasts, and Dean was just great as the host. Because I could impersonate many of the guests, that made my time on the dais more special, and I’m certain that is why they kept asking me back.”

Comedy Central airs celebrity roasts from time to time, but Little says they do not compare to yesteryear. “Today they are pretty disgusting. Nowadays you can pretty much say anything on TV. Back in the day when Dean hosted, no one used profanity. Sadly that’s the way Hollywood has gone. I watched the Oscar’s the other night and I had to turn it off, because it was boring. Sadly, that old school classy Hollywood doesn’t exist anymore.”

Little hosted his own one hour variety show that aired on NBC from 1975-76. Among the many legends who guested on the show were Bob Hope, George Burns, Bing Crosby, Glen Campbell, and the Jackson 5. Fellow comic actress Charlotte Rae was a regular. “It was a lot of fun. I would have loved for it to last longer than one season. But that’s all up to the networks.”

He agrees there is a lack of similar shows on today. “Everything changes. The viewers have changed. A variety show today might be way to expensive to produce, but they sure were popular back in the 1970’s. TV is different today. It’s all about a gimmick. Reality TV shows have taken over.”

Little would go on to work in movies, provide his voice to animated series, host his own HBO Specials, and put out nine comedy albums. His hodgepodge of voices range from politicians, entertainers, and sports figures. Not only does he provide spot on voice, he often portrays the mannerisms of the celebrities he impersonating. Of them which was the simplest to capture.

“Jimmy Stewart was by far the easiest, and the first Hollywood actor I ever did. A lot of impersonators can do a bad impression of Jimmy. Thankfully I got to know him, and we became good friends. I think having that relationship with him made it even easier for me to portray him. He told me, he wish I had been around in the 1940’s & 50’s so I could dub his voice for him.”

Although it appears as though Little had little trouble duplicating many well known voices, some don’t come as easy. “People always want me to do presidents. I’ve had a hard time doing Barack Obama and Donald Trump. Some voices are just hard to get down. I’d say I do a fair impression of Trump.”

Have Little and President Trump ever met. “About five years before he was president I did a show at Mara-Lago, and he was in the audience. It’s the only time we’ve ever met.”

Little admits female voices are not his forte. “I do a few. I can do Carol Channing, Dr. Ruth, and Jean Stapleton. Females are harder to do for me, unless they have a distinctive character like Dr. Ruth. I probably only do about five or six really well.”

And there are a few celebrities, he’s never been able to quite get down. “Had a hard time with Ed McMahon. And I could never do Al Pacino or Robert De Niro. If I have to work that hard at it, than I usually stop trying. There are other impressionists that can do Pacino and De Niro really well, so I leave it to them.”

While he’s been working and living in the United States for over 50 years, Little only became a naturalized American citizen back in 2010. “I was busy and never got around to it. But I figured since I’ve lived here most of my life it was time. I’ve done well, and this country has been good to me so I wanted to become a full-blown citizen. So now I have dual citizenship here and in Canada.”

He does have rather a funny story when taking the oath for citizenship. “I was sworn in as John Wayne. It’s true. The judge was a big fan so I portrayed John for him.”

Little has penned several books over the years, with his most recent appropriately titled, ‘Little By Little: Celebrities I’ve Known and Been’. “It’s not my life story. I talk a little about my childhood. Mostly the book is about people I know, some I know really well, and the relationships we formed over the years. I’ve been very fortunate in this industry.” 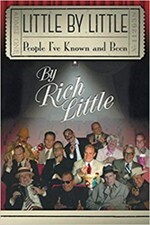 60 years into a stellar career, what is the best thing about being Rich Little. “That’s easy, I don’t have to be myself. When something goes wrong I can blame the people I’m imitating.” Laughing he adds, “Sometimes I get to into character. I’ve portrayed Johnny Carson so many times, when I get off stage I end up writing an alimony check.”

Two of his career highlights revolve around a similar event. “I performed for both Reagan inaugurations. That was both fun and an honor. I got to know him before he became president, so it was even more special for me.”

Rich Little lives comfortably in Las Vegas where he performs four nights a week at the Tropicana Hotel & Casino. “I love it. It’s just a half hour drive, and I do one hour each night.”

He admits many people under 50 aren’t as familiar with him, so crowds at his show tend to be older. “There are a lot of walkers parked in my theatre. Those folks who are retired, or who are senior citizens and want to recapture a little bit of yesteryear, I’m glad to perform for them. Honestly my show is geared toward them, because they know a lot of the characters I’m portraying.” 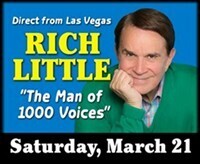 While he enjoys his regular gig in Vegas, Little does perform off the strip. “Occasionally I’ll do shows in some of the destination locations where my fans congregate.” Little will perform at the Alabama Theatre in Myrtle Beach on March 21st. “I’ve been to Myrtle Beach many times. Love performing there. It’s a great part of the country, and there’s always lots to do there.” For more visit https://www.alabama-theatre.com/myrtle-beach-shows/rich-little/5574