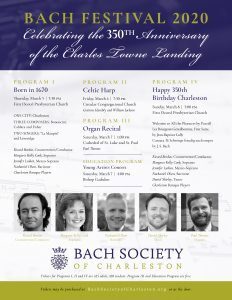 In tribute to Charleston’s founding in 1670, the society’s Artistic Director Ricard Bordas conceived of an ingenious selection of musical offerings for the first concert, Born in 1670 on Thursday, March 5th, 7:30 pm, First (Scots) Presbyterian Church. After weeks of research, he discovered wonderful music ranging from operas and to cantatas by three composers who were not only born in 1670 but were also recognized as leaders in their fields—Giovanni Bononcini, Antonio Caldara, and Johann Caspar Ferdinand Fisher. He also identified two famous singers born in the same year—Julie d’Aubigny (“La Maupin”) and Richard Leveridge, whose voices inspired composers such as Lully and Purcell to write for them. The turbulent life stories of La Maupin have inspired numerous movies, documentaries, and writings. The program will be performed by favorite singers of Charleston audiences: soprano Margaret Kelly Cook, mezzo-soprano Jennifer Luiken, baritone Nathaniel Olson, and Ricard Bordas, countertenor/conductor.

On Friday, March 6th, 7:30 pm at Circular Congregational Church, Grainne Hambly and William Jackson, one of the greatest and in most demand Celtic harp duos, will perform the music of Turlough O’Carolan, believed to have been born in 1670. O’Carolan is recognized as one of Ireland’s finest composers.

On Saturday, March 7, 1:00 pm at the Cathedral of St. Luke and St. Paul, acclaimed concert organist Paul Thomas returns to Charleston to offer a program of J. S. Bach and his contemporaries. Among these is Johann Caspar Ferdinand Fisher (1670-1746), who is considered among the greatest Baroque-era composers for harpsichord.

In keeping with the Bach Society’s mission of fostering appreciation of Baroque music among young performers and audiences, the Festival also includes the Young Artists Concert on Saturday, March 7th at 4 pm at Bishop Gadsden. The concert will include a group of middle and high school instrumentalists selected through an audition process performing on flute, piano, violin, and viola.

Tickets for programs I, II, and IV cost $25 for adults and $10 for students. Organ Recital and Young Performers Concert are free. For information and tickets, visit www.bachsocietyofcharleston.org or call 843-906-3521. Tickets can also be purchased at the door before the concerts.

The Mission of the Bach Society of Charleston is to enrich the Charleston community through presentation of exceptionally high quality, historically informed performances of the finest classical music in the repertoire, with special emphasis on oratorio and choral works, world-class visiting artists, the use of period instruments, and the sacred and secular music of Johann Sebastian Bach and his contemporaries from the Baroque and Early Classical periods.

Artistic Director, Ricard Bordas, conductor, countertenor, and educator, was born in Barcelona and graduated from the Royal Academy of Music, winning several awards including the honorary ARAM. In addition to serving as artistic director of the Bach Society of Charleston, Mr. Bordas is also Assistant Professor at Charleston Southern University, Artistic Director of the Charleston Men’s Chorus, and Director of Choral Music at First (Scots) Presbyterian Church. He has performed in operas and concerts in fourteen countries at prestigious venues such as La Scala, the Netherlands Opera, Royal Opera House, Royal Albert Hall, Barbican Hall, and the Spanish National Concert Hall. He has also performed in international music festivals in Boston, London, Edinburgh, Amsterdam, Bonn, and Stockholm. Mr. Bordas has recorded for the labels DHS, United, Verany, and Discantus. In 2009, a recording of his performance in Lully’s opera Psyche for CPO was nominated for a Grammy. He lives in Mount Pleasant, South Carolina, with his wife, soprano Margaret Kelly Cook.