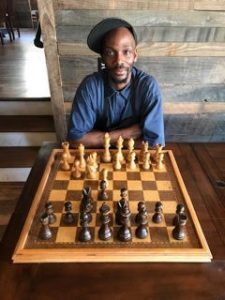 On February 20th at 6 pm, Harold’s Cabin will host “Chess with Charles,” an opportunity for anyone to test their skills against Charles Lee, a Charleston food and beverage industry veteran and chess prodigy.

Lee, currently part of the Harold’s Cabin family, was born and raised on Congress Street and has worked his entire adult life in the Charleston restaurants (McCrady’s, Hank’s Seafood), but few know that he is an incredible chess player. According to a represenative from Harold’s Cabin, Lee is a “voracious student of chess,” who began playing at the age of 11 and “never turns down an opportunity to study from the masters or take on a challenger.”

On February 20th, Lee will be welcoming all challengers. He will play up to three opponents simultaneously while on a twenty-minute clock. Harold’s Cabin has pledged a dinner for two as a prize to anyone who can beat him.