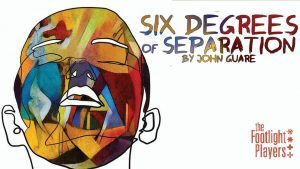 Pulitzer Prize for Drama nominee Six Degrees of Separation is a unique comedic and tragic examination of the roles of duality, racism and class distinction set amongst the elite of 1990’s Upper East Side social circles. The play is the fifth production in Footlight’s current 88th season.

Starring current City Paper Best Actress nominee Carolyn K. Graupner (Footilght’s Death of a Salesman) as NYC socialite Ouisa Kittredge, the play follows Ouisa and her art dealing husband Flan as they are charmed and enamored with a young African-American man named Paul (newcomer Deshawn Mason) who shows up at their doorstep claiming to be friends with their children at Harvard. He also claims to be the son of the legendary actor Sidney Poitier and ends up offering them roles in his father’s upcoming movie. Paul is welcomed with open arms until the pieces start unraveling, his con is exposed and lives are forever changed.

Directed by Kyle Barnette (Head Over Heels, Lady Day at Emerson’s Bar & Grill) John Guare’s Six Degrees of Separation is noted for its title which refers to a statistical theory which states that any two people in the world can be connected through only six other people and examines ‘the threads of chance that link one person to another’ (NY Times). It is a rapid-paced work of theatre that features zippy dialogue and witty one-liners matched with wildly comic moments packed right up next to some truly disturbing ones all told with a minimalist approach to the set and lighting in the show.

Long considered one of American theatre’s contemporary classics, the play also heavily features themes about art and the imagination including the duality of the Kittredge’s prized painted on both sides Kandinsky original painting that represents chaos and control, a running theme throughout the play.