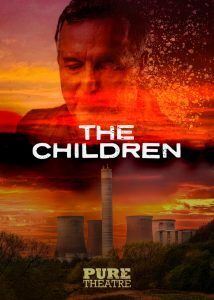 PURE Theatre is pleased to announce the Regional Premiere of The Children by Lucy Kirkwood. Two retired nuclear scientists reside in an isolated cottage by the sea as the world around them crumbles. Together they are going to live forever on yoga and yogurt, until an old friend arrives with a frightening request.

PURE Theatre’s production will be directed by Core Ensemble Member Randy Neale. The Children will feature Core Ensemble member Mark Landis as well as actors Tish Lynn and Lynda Harvey. Estimated run time is 90 minutes with no intermission and will run from March 5 – 28, 2020. The Children’s world premiere was at the Royal Court Theatre, London, in 2016 and later opened on Broadway in December, 2017 with the same cast and creative team. The play received two Tony Award nominations, for Best Play and Best Featured Actress in a Play. The event that served as the inspiration for the play was the 2011 Fukushima nuclear explosion in Japan.

Lucy Kirkwood is an acclaimed playwright and screenwriter. In 2009, Kirkwood’s play It Felt Empty When The Heart Went At First But It Is Alright Now was produced by Clean Break Theatre Company at the Arcola Theatre. The play was nominated for an Evening Standard Award for Best Newcomer and made Kirkwood joint winner of the 2010 John Whiting Award. NSFW premiered at the Royal Court Theatre in 2012, starring Janie Dee and Julian Barratt. CHIMERICA premiered at the Almeida Theatre in 2013 and subsequently transferred to the West End, earning Best New Play at the 2014 Olivier and Evening Standard Awards, as well as the Critics Circle Award and the Susan Smith Blackburn Prize.

Tickets for The Children are on sale now at puretheatre.org and at the PURE Theatre box office. Tickets range from $10-$35. Advance purchases are strongly recommended. In an effort to make attendance as accessible as possible, PURE will offer a number of opportunities for accessible ticket rates throughout the run, including two Pay-What-You-Will performances on Thursday, March 5th and Wednesday, March 11th at 7:30pm as well as our regular $10 student ticket rates. A limited number of $10 tickets (limit two per purchase) will also be available for each performance on a first come, first served basis using the online code: “welcome.” Additional information about The Children can be found on PURE’s website at www.puretheatre.org or by calling the box office at 843.723.4444 Tuesday through Friday from 12:00 pm – 6:00 pm and two hours prior to curtain on performance days. PURE Theatre is located at the Cannon Street Arts Center, 134 Cannon Street and has a complimentary parking lot adjacent to the Arts Center for performances.