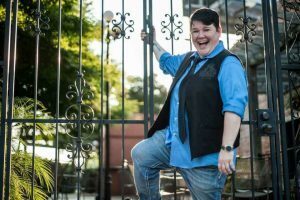 Creekside Comedy Night returns to The Captain’s Quarters on Saturday, February 15th for another evening of hilarious stand-up. Comedian Jenn Snyder (right) will headline the show, which begins at 9 pm.


Host Keith “Big Daddy” Dee had the following to say about Snyder:


No offense to the rest of the hilarious comedians in the world, but Jenn Snyder is one of our all time favorites. Do not miss this incredible comedian. She will be joined by some friends from Columbia – Marcus D and Ryan Pichoff.

At 5’2, our headliner Jenn Snyder packs a whole lot of funny in her one-two punch style of comedy. With topics ranging from her days growing up as a lesbian in a “good ol’ boy” town, to her dealing with the public on a daily basis, this comedian will pull you in with her stories and leave you wanting more with her quick wit and hilarious observations. Born and raised in Columbia, South Carolina, her ultimate goal is to unite all people through laughter. Jenn has headlined in venues and festivals all over the country. She was the 2018 winner of Soda City Comedy Competition, and she is honestly one of the funniest people I know.

Tickets to the show can be purchased here. The Captain’s Quarters can be found at 2600 Savannah Highway in West Ashley.