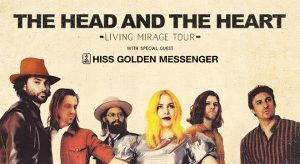 The Head and The Heart has announced their spring tour will visit the North Charleston Performing Arts Center on April 22nd with special guest Hiss Golden Messenger.

Alongside the new tour dates, the band has released the official video for “Honeybee,” starring the band’s own Charity Rose Thielen, directed by Clare Gillen with creative direction from Charity and Gilly Studio. You can see the video below. “Honeybee” has become a fan favorite and breakout track from the band’s fourth full-length album, Living Mirage, released to critical praise last year. The track has seen 30 million streams globally with weekly streams over 1 million in the U.S.

“Honeybee” follows on the heels of album track “Missed Connection” which secured the No. 1 position on the Alternative Chart and No. 1 at Mediabase and BDS alternative charts, already having achieved No. 1 on the AAA chart. The Head and the Heart will perform “Honeybee” on The Late Late Show with James Corden on March 5th.

Follow us
Related Topics:Hiss Golden Messengernorth charleston performing arts centerthe head and the heart
Up Next