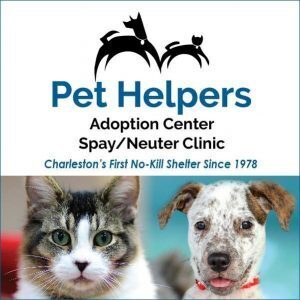 Caesar, an eight-year-old Great Dane, might be living large after being adopted, but he’s still an icon at not only Pet Helpers, but nationwide! Caesar will be appearing in this year’s Puppy Bowl, airing on Animal Planet on Sunday, February 2nd at 3 pm.

In September 2019, Caesar was chosen to be part of Discovery Channel and Subaru’s “Underdog Campaign” after overcoming a life of neglect. The first commercial to feature Caesar aired in October 2019. Some of Pet Helpers puppy alumni will also be featured in the opening of Puppy Bowl alongside Referee Dan. Those puppies have all been adopted and will be watching the Bowl from their forever homes!

Caesar arrived at Pet Helpers through a partner shelter in Horry County. He was extremely malnourished and underweight. On average, a male Great Dane can weigh anywhere between 120-200 pounds; Caesar weighed a mere 80 pounds on his arrival.

Due to his health issues, the staff at Pet Helpers worked tirelessly to help him gain strength and weight over the course of several months. From the beginning and through it all, Caesar’s incredible disposition shone through and captured the hearts of every person he met. When Kelly Holland saw his first video feature, it was love at first sight and he was soon adopted. Caesar was the guest of honor with his new mom, Kelly Holland at Pet Helpers’ annual Fur Ball last year.

Pet Helpers Adoption Center and Spay/Neuter Clinic is a 501(c)3 dedicated to serving the animals and community across Lowcountry. Their mission is to end the euthanasia of all adoptable cats and dogs by keeping all animals until adopted, providing low-cost spay/neuter surgeries, offering humane education programs, pursuing animal-cruelty prosecution, and initiating animal-welfare legislation. For more information, please visit www.pethelpers.org.