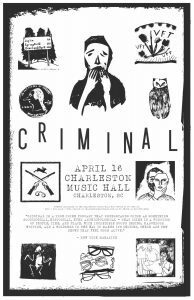 I’m Phoebe Judge, this is Criminal. Ok, I’m not, and this isn’t, but you could hear that sentence uttered live on April 16th at the Charleston Music Hall. Criminal, an award-winning podcast about crime, and its host Phoebe Judge will visit the Holy City that evening for a live recording at 8 pm.


The podcast launched in January of 2014, and is based in Durham, North Carolina. New episodes come out twice a month, always on Fridays. In 2015, it won a Third Coast International Audio Festival “Best Documentary” award for their story, “695-BGK,” and was chosen as an iTunes “Best of 2015.” In 2016, Criminal was featured in “Best of” lists in Wired, The Atlantic, USA Today, and Rolling Stone.

Episodes feature stories of people who have done wrong, been wronged, or gotten caught somewhere in the middle. During live shows, Judge presents brand new stories, told live on stage, and scored and mixed live by co-creator Lauren Spohrer. Each story is accompanied by visuals; photographs of forensic evidence, historical court documents, and original animations by Julienne Alexander.

Follow us
Related Topics:charleston music hallCriminalPhoebe Judge
Up Next