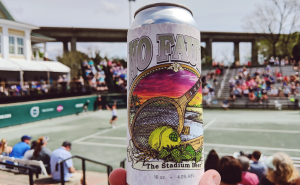 Volvo Car Stadium this week announced that their Daniel Island neighbor Dockery’s will again be the exclusive local craft beer provider for the venue during the 2020 Volvo Car Open and Concert Series. This summer, in addition to No Fault Stadium Beer, Dockery’s will collaborate with Volvo Car Stadium to produce Hop the Net IPA, a slightly tropical India Pale Ale brewed with Mosaic, Citra, and El Dorado hops.

The two organizations also announced that they are launching a design contest for the Hop the Net IPA can label. Contest winners will receive recognition on the can and at the launch event, $500 cash, and tickets to the Volvo Car Open finals. The official launch event will be announced at a later date.

Entries to the contest need to focus on the things that make the Daniel Island venue popular – an incredible tennis tournament, the summer concert music series, and their connection to the Lowcountry.

“We had a blast with this contest last year,” Bob Moran, Tournament Director at Volvo Car Open, said. “We had 40 entries to choose from that really explored the place that the Volvo Car Open and the concert series have in the hearts of Charlestonians. We hope this year we have even more.”

Contest entries must be received by 5 pm on February 23rd through the web form at dockerysdi.com/cancontest. All rules are posted on that web page, as are templates for completing the design.

For more information on the contest, contact Chad Elkins at chad@dockerysdi.com.

Follow us
Related Topics:Dockery’svolvo car openvolvo car stadium
Up Next

Holy City Brewing to Host Oyster Roast with The Secrets