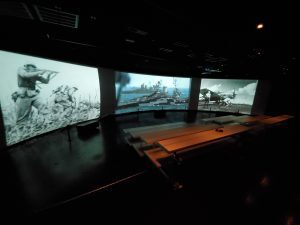 From February 19th to 23rd, Patriots Point Naval & Maritime Museum and the USS Yorktown Foundation will host an inspiring traveling exhibit that includes a 160-degree panoramic theater that features the original film Rise Above.

The Commemorative Air Force’s RISE ABOVE traveling exhibit film is free for visitors to view, 30-minutes long, and describes the story behind the U.S. military’s first black pilots, the Tuskegee Airmen. Showings will start at the beginning of every hour from 9 am to 5 pm. On Thursday, February 20th, the exhibit will be closed to visitors so that local students can experience the film.

RISE ABOVE is sponsored by Lowcountry Aviation Sky Arrow. The aviation services company will display a single-engine Sky Arrow plane alongside the traveling exhibit. The aircraft is used by the company to train aspiring pilots. Partners of Patriots Point’s for the exhibit include Veteran of Foreign Wars (VFW) Post 10624 and American Legion Post 136.

“The World War II story of the Tuskegee Airmen serves as a great example of how to overcome any obstacle and triumph over any adversities,” said Patriots Point Naval & Maritime Museum Executive Director Larry Murray.  “Their story is one that will serve an important message during Black History Month, a time we celebrate the achievements of African Americans.”

About the Tuskegee Airmen and Red Tails

Tuskegee Airmen are personnel – both military and civilian, male and female – that served with segregated 332nd Fighter Group and the 477th Bombardment Group during World War II and before the integration of the Armed Forces.  The name originates from the segregated flying training program at Tuskegee Institute Army Air Corps Program, a unit located in Tuskegee, Alabama.

“Red Tails” was a nickname given to the Tuskegee Airmen during their time in service during World War II.  It evolved from bomber pilots referring to their Tuskegee Airmen fighter escorts as Red Tail Angels because of their reputation and record for keeping the bombers safe on dangerous missions.

Holy City Brewing to Host Oyster Roast with The Secrets