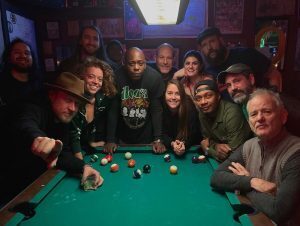 Superstar comedians Dave Chappelle, Bill Murry, and Michelle Wolf on Thursday hung out at the Recovery Room on King Street. The trio were at the downtown watering hole after Chappelle’s two-show stand at the North Charleston Performing Arts Center. Wolf opened each of Chappelle’s performances.


The Rec Room on Friday morning shared a photo (right) of the comedians on their Instagram page.

DJ Trauma, Chappelle’s official tour DJ, was originally going to perform at Deco Nightclub on Thursday night, but that event was canceled after the comedian added a second show at the North Charleston Performing Arts Center. Chappelle and “other celebrity special guests” were expected to attend that event, but with the schedule change, it appears the party moved to the Rec Room. DJ Trauma was also with the trio of comedians.

Chappelle is one of the most popular and successful comedians of our time. Besides his numerous standup specials, he is known for creating, writing, and starring in Chappelle’s Show on Comedy Central. He has won two Emmy Awards, two Grammy Awards, and the Mark Twain Prize for American Humor.

Wolf is a comedian and writer that rose to prominence as a contributor and writer on the Late Night with Seth Meyers and The Daily Show with Trevor Noah. She is best known for being the featured performer at the 2018 White House Correspondents’ Dinner and for serving as host of the Netflix comedy talk show series The Break with Michelle Wolf.

Murray, a Charleston resident, is a legendary comedian and actor (Saturday Night Live, Caddyshack, Ghostbusters, Groundhog Day, Lost in Translation)who has won Emmy and Golden Globe awards and the Mark Twain Prize for American Humor. He is also part owner of the Charleston Riverdogs.

It’s not every day you get to hang with Bill Murray, Dave Chapelle and Michelle Wolf at the Rec Room!