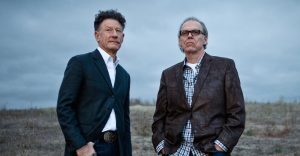 The Gaillard Center and NS2 will present An Acoustic Evening with Lyle Lovett and John Hiatt on May 15, 2020. Tickets go on sale Friday, January 31st at 11 am.

A singer, composer, and actor, Lyle Lovett has broadened the definition of American music in a career that spans 14 albums. Coupled with his gift for storytelling, the Texas-based musician fuses elements of country, swing, jazz, folk, gospel, and blues in a convention-defying manner that breaks down barriers.

Since his self-titled debut in 1986, Lovett has evolved into one of music’s most vibrant and iconic performers. Among his many accolades, besides the four Grammy Awards, he was given the Americana Music Association’s inaugural Trailblazer Award, and was named Texas State Musician.

“You know how writing goes for me,” John Hiatt said. “I get a couple of lines going, and then I just tag along as the songs start to reveal themselves. You’ve just gotta jump inside and take the ride.”

Hiatt has been on that ride for more than four decades now. In fact, since the release of his 1974 debut, Hangin’ Around the Observatory, rarely has more than a year or two passed without a new Hiatt collection hitting the shelves.

Click here for more information on their Charleston performance.
–