Asheville, North Carolina native Hilliary Begley will perform this Saturday night as the Feral Hogs Tour makes a pit stop at Creekside Comedy Night. Begley will be joined by fellow funny ladies Ari Kobler and Bridgette Martin. According to Begley the show if not for kids or those easily offended.

“It’s often falls somewhere between PG13 and R-rated. I’d say it’s a little edgy. Speaking for myself I am usually good at channeling the room, gauging how my comedy is going to go over. The best way to sum up my comedy and maybe the other ladies is a tad bit bawdry.”

The three ladies may not be slimmed down Victoria Secret models, which is why maybe Martin came up with the tongue and cheek name for the tour. “I was not a part of the naming of Feral Hogs! Bridgette texted me with the suggestion and I said, “WHY NOT?” I do like to think of myself in more of a Miss Piggyesque light. But three fat white girls?! Feral Hogs is a good name! Haha.” 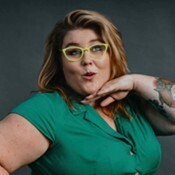 Begley began her comedic journey back in 2013, venturing to Los Angeles a few years earlier with hopes of being an actress as well as a comedian. “I lived in LA for a year.” While southern California didn’t work out as she planned, Begley returned back to the Tarheel state in 2012, but didn’t give up on her dreams.

She realized her love of comedy in her younger years, but it took a little prodding for her to get up the nerve to take the stage. “I think I was born an entertainer, but I was pressured onto the stage. I had made empty promises about trying it, until enough of my friends rallied for me to finally step behind the mic!”

A fan of comedy her entire life, Begley drew inspiration from the greats. “Hands down Richard Pryor’s Live on the Sunset Strip show made me want to go for it. He was so raw. I thought if I could ever make people feel how he made me feel I’d win. And then of course Lucille Ball and Carol Burnett help mold who I am as just a woman.”

Begley’s own brand of humor comes from deep within. “The inner most depths of my soul! I don’t do topical. Mine is for sure perception based. My daily life and my time in the church.”

After cutting her teeth for several years at open mic nights and casting calls around the southeast, Begley finally began to make her name known. Her self deprecating humor opened up doors for her. A small role in the 2018 film ‘Dumplin’ starring Jennifer Aniston only helped further her career.

“‘Dumplin’ literally fell into my lap! I opened for Jon Reep at the Orange Peel in Asheville and Facebook kinda did the rest. For certain the movie has helped me tons! It is a revolutionary film and there couldn’t have been a better first role for me than Aunt Lucy!” ‘Dumplin’ is best described as a coming of age movie about a self-absorbed former teen beauty queen (Aniston), butting heads with her plus sized daughter during pageant season.

If you find her mesmerizing in her small role in ‘Dumplin’, you can find Begley as Dixie Flagg in the 2019 film ‘When We Last Spoke’ starring Cloris Leachman, Corbin Bernsen, and Melissa Gilbert. Set in 1967, the film focuses on two sisters abandoned and raised by grandparents in the town of Fireside. Humor, heartbreak and triumph are served with whipped cream and lots of local nuts in this heartwarming tale of family, friendship and forgiveness. 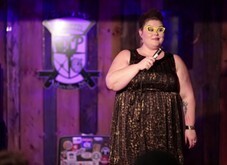 Begley hosts a regular Sunday night comedy show called ‘Hallelujah! Hilliary’s Comedy Revival’ in Asheville. “It is my baby! I did a show with the hilarious Katie Hughes and afterwards we had a conversation where she asked what I wanted out of this comedy life. I told her I wanted to make a living doing comedy.”

The fellow comic challenged Begley. “She told me at start a show and she’d check back in with me by such and such date. I like a good challenge! So I went straight to work trying to put a show together, but I didn’t really know my ass from apple butter about how to do that. “Talk about what you know!”, they said. I know church, so started a blasphemously church themed church service open mic! You will be blessed.”

Whether it’s her funny bone or larger than life personality, Begley gets compared to a couple of well known entertainers, including Chrissy Metz. Begley doesn’t seem to mind. “Still not as seldom as I’d like! She’s beautiful but WE ARE NOT THE SAME!! I also get Melissa McCarthy a lot.”