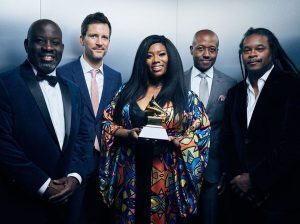 Started by College of Charleston alumnus Clay Ross, Ranky Tanky, which is a Gullah term loosely translated as “work it” or “get funky,” takes a modern approach to the traditional sounds of Gullah music.

The band features Ross on vocals and guitar, Quentin Baxter on drums, Kevin Hamilton on bass, Charlton Singleton on trumpet and vocals, and Quiana Parler on vocals. Ross, Baxter and Hamilton all majored in music at the College of Charleston and are South Carolina natives – as is Singleton.

You can see a video of Ranky Tanky winning the award below.