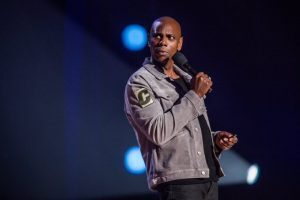 UPDATE: 1/28/20 – Due to the addition of a second performance at the North Charleston Performing Arts Center, this event has been canceled.

As many of you are likely aware, superstar comedian Dave Chappelle will take the North Charleston Performing Arts Center stage on Thursday, January 30th. If you were unable to snag tickets, you still may be able to catch Chappelle that evening at a popular downtown nightclub.

According to local event producer Lawson Roberts, DJ Trauma, Chappelle’s official tour DJ, will be performing at Deco Nightclub (28 Ann Street) starting at 10 pm, and the comedian is expected to attend. Lawson also said “other celebrity special guests” are expected to be in attendance too.

Tickets for DJ Trauma’s Deco show can be purchased at the door for $25. VIP tables are also available. For more information on tables and tickets, you can e-mai vip@decocharleston.com or call 843-640-6996.