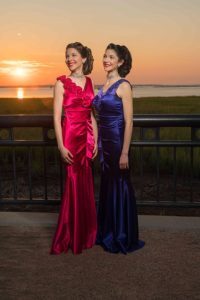 Charleston song and dance sisters Gracie and Lacy are celebrating 25 years in show business and kicking off the season with “Unforgettable,” a special Valentine’s week concert on Wednesday, February 12th at 7 pm at Forte Jazz Lounge.
It was over two decades ago when sisters Gracie & Lacy produced their first show – on their driveway. Living in a suburb of St. Louis at the time, “Broadway on the Driveway” became a local legend as hundreds flocked to the performances each summer. The productions caught the eye of the media, and the traffic jams caught the eye of local law enforcement.
Juggling their schoolwork and out-of-control childhood hobby, Gracie & Lacy moved the shows to more suitable venues, and soon became an award-winning touring act.  The full-time entertainers reconnected with their Charlestonian roots in 2014, quickly becoming a staple in the local music scene.
In their Lowcountry hometown they are known for their many sold-out and standing-room only shows, including appearances in Piccolo Spoleto, North Charleston Arts Festival, Holiday Pops with Charleston Symphony Orchestra, and even a locally filmed HBO series.
You can catch Gracie & Lacy’s one-night-only show in Charleston at the new Forte Jazz Lounge on King Street. The evening will feature classic love songs and dance routines, as well as Gracie & Lacy’s humorous tribute to singles and online dating. Tickets are available at all Convention and Visitor Bureau locations (Downtown, Kiawah, Mt. Pleasant, N. Charleston), GracieAndLacy.com, or 843-259-8872.

Follow us
Related Topics:Forte Jazz LoungeGracie and Lacy
Up Next