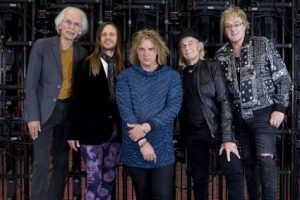 UPDATE: 3/16/20 – “This event has been canceled. Tickets will be refunded at point of purchase. We apologize for any inconvenience caused.”

Prog rock pioneers and Rock & Roll Hall of Fame inductees YES have announced that they will be kicking off their spring tour at the North Charleston Performing Arts Center on Thursday, March 19th. Tickets are now on sale.

“We can’t think of a better way to lead into our ‘Cruise To The Edge’ than with five shows in the Southeast,” Howe said.

White agreed, saying, “Florida and South Carolina in the spring sounds absolutely perfect for a British band like us. We look forward to seeing everyone for a night of YES music.”

Follow us
Related Topics:north charleston performing arts centerYES
Up Next