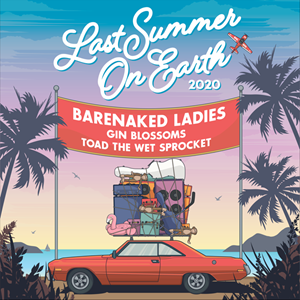 UPDATE: The Barenaked Ladies concert, originally scheduled to take place at the Volvo Car Stadium, has been rescheduled to Friday, July 16, 2021 at the North Charleston Coliseum. Tickets are on sale now!

Multi-platinum rock band Barenaked Ladies are bringing their “Last Summer On Earth” tour to the Volvo Car Stadium on Friday, July 17th. Gin Blossoms and Toad the Wet Sprocket will also perform at the show.

Following their critically-acclaimed 2019 tour with Hootie & the Blowfish, Barenaked Ladies is ready to hit the road again and bring out all the fan favorites that have built them a long-lasting career and worldwide fanbase. The Toronto-based group, who have now sold over 15 million albums worldwide and earned multiple JUNO Awards and Grammy nominations, are also set to release new music in May of this year.

This will be the 6th edition of the tour, founded by the band in 2012 – the year that the Mayan calendar predicted would be the last, hence the “Last Summer On Earth.” Past acts include Cracker, Big Head Todd & the Monsters, Blues Traveler, Guster, Ben Folds Five, Violent Femmes, Colin Hay, OMD, Howard Jones, Better Than Ezra, and KT Tunstall.

Each ticket purchased for the show will include a digital download of Barenaked Ladies’ forthcoming album. VIP packages and album digital downloads may not be available in all venues.