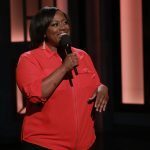 Although she admits to beginning her comedy career 17 years ago, it wasn’t until mid 2008 that Erin Jackson started to take the job seriously. “In summer 2008, I made my TV debut on Comedy Central and advanced to the semis of Last Comic Standing.” Prior to taking her leap of faith, Jackson worked at jobs that just paid the bills. “I was working at a newspaper in the online marketing department. Prior to that I had been a copywriter working in higher education.”

But it was another female comedian turned talk show host that pushed Jackson over the edge. “It wasn’t until that fall (2008), when I appeared on the Ellen DeGeneres Show, and she asked me when I was going to quit my job that I even considered it. I figured if Ellen thought I could do it, then maybe I should try. And I quit my job a few months later.”

A New York City resident, Jackson’s didn’t fully realize her comedic talent but says her inner circle may have. “I think people who knew me well thought I was funny. I definitely not a class clown, but if we were friends, I’d whisper snarky things in your ear and get you in trouble for laughing.

She laughs recalling the very first time she performed before a live audience. “My very first show was at an open mic at a sushi bar in DC’s Dupont Circle. There was a mic stand right next to the sushi case. The jokes were terrible, but the rush from just being up there was amazing.” Jackson admits the pilot light was lit. “I was hooked right away. Thankfully, the jokes are a little better now.”

Like many of her fellow stand up comics, Jackson’s comedy comes from observation. “The everyday slice of life stuff, my family, friends, dating, and people I meet out on the street or encounter on public transportation. All of my jokes originate from real, lived experiences.”

Jackson says no matter the material, she finds a way to put her own spin on a joke to make it funny. “Even if the premise isn’t super clever, I think authenticity is what makes the best jokes relatable.”

One of her early influences might be marred in controversy today, but she still admits to being in awe of his delivery. “My first comedy influence, the first comic I ever saw live was Bill Cosby. I saw him in junior high with my dad and a bunch of times since. I loved the way he spun stories, and how his act felt like a conversation. That’s something I strive for in my writing.” She adds, “It can be awkward nowadays to talk about him as an influence, but you can’t be un-influenced by someone.”

While stand up comedy with a few exceptions was predominantly male driven for most of the 20th century, the tide for woman and woman of color changed in the 1980’s when Whoopi Goldberg, Ellen DeGeneres, Roseanne Barr, Wanda Sykes, and others broke stereotypes. Jackson agrees. “It’s amazing that we’re in a time when talented people of all stripes are able to have their talents recognized and rewarded.”

Over the past decade Jackson has appeared on late night talk shows, performed regularly in comedy clubs, co-hosted three seasons of Exhale, a talk panel series on the ASPiRE television network, with her stand up comic star still on the rise. Adding to her success, Jackson’s new album, ‘Grudgery’, recently debuted at No. 1 on the iTunes comedy charts.

“I am so pleased and, honestly, surprised by the success of my album. It took 15 years for me to build up the nerve to release one, but the reception has been tremendous. It’s in heavy rotation on satellite radio and made it to No. 1 (for like a day or two, but it counts) on the iTunes comedy charts.” 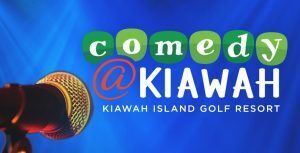 Erin Jackson will bring her tell it to you straight brand of comedy to the low country when she takes part in the Kiawah Comedy Weekend beginning January 24th. “This will be my first time in both Charleston and Kiawah. I’m super excited to visit and perform for you guys.” For more on the event visit, https://kiawahresort.com/packages/signature-events/comedy-weekend/

For more on Erin Jackson visit her website at http://erinjackson.net/