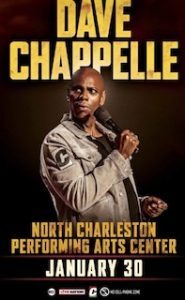 The North Charleston Performing Arts Center today announced that legendary comedian Dave Chappelle will perform at the venue on Thursday, January 30th at 7pm. Tickets go on sale Thursday, January 16th at 10 am.

The comedian will also perform on Wednesday, January 29th at the Township Auditorium in Columbia. According to ABC News 4, proceeds from both shows will go to benefit Andrew Yang’s presidential campaign. Chappelle recently announced he is endorsing Yang for president.

Keep this note from the comedian’s team in mind when preparing to attend the show:

“No cellphones, cameras or recording devices will be allowed at this show. Upon arrival, all phones and smart watches will be secured in Yondr pouches that will be unlocked at the end of the show. Guests maintain possession of their phones throughout the night, and if needed, may access their phones at designated Yondr unlocking stations in the lobby. All guests are encouraged to print their tickets in advance to ensure a smooth entry process. Anyone caught with a cellphone in the venue will be immediately ejected. We appreciate your cooperation in creating a phone-free viewing experience.”

The comedian is certainly familiar with the Charleston area. He performed four shows at the Charleston Music Hall in February of 2017 and two shows at the North Charleston Performing Arts Center back in December 2013. Following the latter shows, he spent time at Republic on King Street.

In February 2017, Chappelle was spotted around town with actor Norman Reedus (The Walking Dead). The pair were filming an episode of AMC’s Ride with Norman Reedus which aired in November of that year.
–