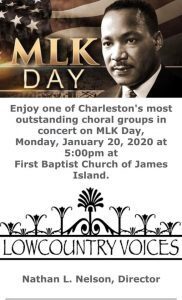 The City of Charleston and YWCA Greater Charleston will sponsor a concert titled “Hold Fast to the Dream” honoring the legacy of The Reverend Dr. Martin Luther King, Jr. at 5 pm on Monday, January 20th at First Baptist Church of James Island, located at 1110 Camp Road. Doors will open at 4 pm.

The concert, which is free and open to the public, will feature Lowcountry Voices, one of Charleston’s most outstanding choral groups known for their uplifting regional and international performances, under the direction of Mr. Nathan L. Nelson.

Throughout the concert, set to take place on the official MLK Holiday, Rev. Dr. Kylon Middleton, Jr. of Mt. Zion AME Church will narrate the poem “I Dream A World” by Langston Hughes.

The 90-minute concert will open and close, respectively, with Civil Rights Movement anthems “Lift Every Voice and Sing” and “We Shall Overcome.” Some of the contemporary and sacred music to be performed includes “I Am His Child” by composer Moses Hogan, “Ain’t Got Time to Die” by composer Hall Johnson, “The Storm Is Passing Over” by composer Barbara Baker and “The King’s Tribute” by composers Curt Burrell and H. R. Palmer.