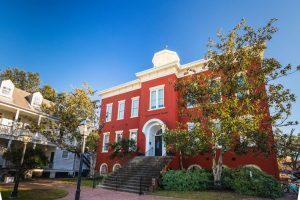 After being closed for two years, the Avery Research Center for African American History and Culture at the College of Charleston will reopen this month following extensive structural renovations. An open house and grand opening event will take place from 4 pm to 7 pm on Wednesday, January 15th, 2020.

“People have missed the Avery,” Daron-Lee Calhoun II, the Avery’s facilities manager and director of public programming and outreach, said. “It’s an important asset that gives the community an opportunity to actually see their history.”

Originally constructed in 1867 as the Avery Normal Institute, the first accredited secondary school for African Americans in Charleston, the 153-year-old building, which is located a few blocks west of campus on Bull Street, underwent a major, $2.3 million renovation. Repairs included replacing the HVAC systems, windows and roof; restoring the soffit, parapets and exterior wall system; and adding new shelving for better storage of all the artifacts and manuscripts.

In 1985, under the leadership of the former South Carolina state Rep. Lucille Whipper and archivist Margaretta P. Childs, the alumni of the Avery Normal Institute formed the Avery Institute of Afro-American History and Culture. It joined with the College of Charleston to establish the Avery Research Center to preserve the legacy of the Avery Normal Institute and educate the community on the history and culture of African Americans in Charleston, the South Carolina Lowcountry, and South Carolina at large. In addition to permanent exhibits highlighting African American culture and history, the center houses a variety of historical documents and artifacts available to researchers including approximately 200 manuscript collections, more than 4,000 photographs and hundreds of reels of microfilm, VHS tapes, clipping files and digital formats.

With repairs of leaks, better temperature control and improved storage, the center can now focus on growing and enhancing its programs and exhibits.

“The community will be able to see better programming here now,” Calhoun said.

To mark its reopening, the Avery is hosting a series of new exhibits beginning on January 15th, including:

And with the Avery Research Center having recently completed its search for a new executive director, who will be announced in April, Calhoun says the center can now move forward with a new chapter in the building’s long history and cultural significance.

“The new executive director can come in and focus on staff, focus on research, focus on raising money and being a public liaison for the Avery,” Calhoun said. “It’s definitely a fresh start.”

Follow us
Related Topics:college of charlestonThe Avery Research Center
Up Next