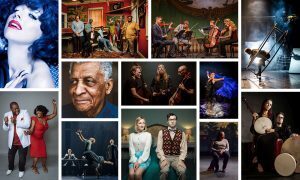 General Director Nigel Redden today announced details of the 44th season of Spoleto Festival USA, taking place May 22 – June 7, 2020, in Charleston. For 17 days and nights, a variety of artists fill the city’s theaters, churches, and outdoor spaces with wide-ranging performances and concerts.

“As Charleston celebrates the 350th anniversary of its founding, the Festival looks to its own place in the city’s rich history,” Redden said. “There’s no doubt that Spoleto, founded in 1977, contributed to Charleston’s flourishing into its current status as a top destination—by bringing in world-class artists, sparking a thriving arts and culture scene, and helping to revitalize performance spaces that can be used year-round.”

After undergoing significant backstage and structural renovations, the College of Charleston Sottile Theatre will reopen with Spoleto’s landmark world premiere, Omar, a distinctly Charleston—and American—story. Based on the 1831 autobiography of Omar Ibn Said, an enslaved Muslim African who was sold in Charleston in 1807, Omar is co-commissioned and co-produced by Spoleto Festival USA and Carolina Performing Arts at the University of North Carolina Chapel Hill. The opera’s narrative traces Omar Ibn Said’s spiritual journey from his life in West Africa to his enslavement in the Carolinas. Rhiannon Giddens, a Grammy winner and MacArthur Fellow known for exploring the legacy of African American folk traditions, has created the libretto and score. American composer Michael Abels has worked closely with Giddens as co-composer, and Festival Resident Conductor and Director of Orchestral Activities John Kennedy is conducting. Charlotte Brathwaite, director, leads a creative team including Mimi Lien (set design), Ben Zamora (lighting design), Dede Ayite (costume design), Kent Barrett (video design), and Ni’Ja Whitson (choreography). Tenor Jamez McCorkle, who Festival audiences fondly remember as Lensky in the 2017 production of Eugene Onegin, sings the title role. The opera will run for six performances beginning May 22.

As Redden previously noted, “Ibn Said’s autobiography is an extraordinary work, and his story is one that’s absolutely crucial to tell. According to some scholars, as many as 30 percent of the enslaved Africans who arrived in the colonies and subsequently in the United States were Muslim, which is a largely unexplored truth in modern discussions of slavery. But Ibn Said is not a number—he’s a man who had feelings, a history, and a life that was taken from him.”

Additional performances during Spoleto’s 2020 season aim to illuminate stories from marginalized communities – in Charleston and beyond. Pianist Jason Moran and mezzo-soprano Alicia Hall Moran’s Two Wings: The Story of Black America in Migration, a highlight of the 2020 Wells Fargo Jazz series, is being specifically reconstructed for a Charleston premiere (Charleston Gaillard Center, May 27). Weaving original compositions, jazz standards, and text, this multifaceted concert follows the journey of six million African Americans from the rural South to points north and west. 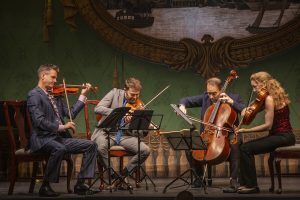 Joining the program are Imani Winds, Toshi Reagon, and filmmaker/writer Julie Dash. Ahead of the performance, Wall Street Journal music critic and Spoleto’s Wells Fargo Jazz advisor Larry Blumenfeld sits down with the Morans on May 26 for a Jazz Talk—one of Spoleto’s many free events that aim to enhance the audience’s experience and unmask various aspects of the Festival’s program. Blumenfeld leads a second Jazz Talk (June 1) with pianist Abdullah Ibrahim, a visionary during the anti-apartheid movement and a 2019 NEA Jazz Master. Ibrahim and his band Ekaya perform at the College of Charleston Sottile Theatre on June 2.

A screening of Jordan Peele’s Academy Award-winning film Get Out takes place May 26 with live accompaniment by the Spoleto Festival USA Orchestra, led by the film’s composer Michael Abels (Abels is also the co-composer of Omar) In Get Out, released by Universal Pictures in 2017, a young African American man visits his white girlfriend’s family estate and gradually becomes ensnared in a sinister plot. Sixteen choristers from the Westminster Choir will accompany the Festival orchestra in the Charleston Gaillard Center.

Created in the months following the shooting of black teenager Michael Brown in Ferguson, Missouri, Until the Flood is one of award-winning writer/performer Dael Orlandersmith’s newest works. Based on dozens of intimate conversations Orlandersmith conducted with Ferguson community members, this New York Times Critic’s Pick runs May 22 – 26 in the Emmett Robinson Theatre at College of Charleston. The one-woman play, writes The Chicago Tribune, “achieves a great beauty by bringing us together rather than driving us apart.”

Spoleto’s 2020 theater programming includes two additional works of particular relevance: The Believers Are But Brothers (Emmett Robinson Theatre at College of Charleston, June 2 – 6) by Javaad Alipoor follows three men’s journeys to online radicalization, while Sea Sick (Woolfe Street Playhouse, May 27 – 30) examines the effects of climate change on the global ocean. This one-woman play, written by Alanna Mitchell and presented as part of the American Express Woolfe Street Series, is especially appropriate for a US premiere taking place in Charleston, as the coastal city wrestles with flooding issues and the threat of offshore drilling.

On May 29 and 31, Spoleto is producing a distinctive choral-and-visual-arts experience at Memminger Auditorium, The Stations. In this production, members of the Westminster Choir—led by Festival Director of Choral Activities Joe Miller—perform settings from Carlo Gesualdo’s Responsoria while photographs from artist Tom Kiefer’s The American Dream series are illuminated throughout the space. Gesualdo’s music, written in 1611 for Holy Week Tenebrae services leading up to Easter Sunday, provides a compelling setting for Kiefer’s images depicting items collected at a US Customs and Border Protections facility in Arizona. The Westminster Choir, celebrating its 100th anniversary, also performs two solo repertory concerts at St. Matthew’s Lutheran Church (May 23 and 30) featuring music by Benjamin Britten, Paweł Łukaszewski, Daniel Elder, and Jake Runestad.

As always, classical music at the Festival spans centuries. In various concerts throughout the season, members of the Spoleto Festival USA Orchestra, under the direction of Festival Resident Conductor and Director of Orchestral Activities John Kennedy, play selections from Vivaldi, Beethoven, and Liszt, along with contemporary artists Max Richter, Michael Abels, inti figgis-vizueta, and Derek Tywoniuk, among others. In a concert highlighting Holst’s The Planets (Charleston Gaillard Center, May 30), the Festival Orchestra also plays “Rhapsodic Overture” by Edmund Thornton Jenkins—a Charlestonian born in 1894 who got his early start in his father’s Jenkins Orphanage Band before receiving a diploma from London’s Royal Academy of Music. Also featured on this concert are Charleston natives Micah McLaurin, performing Liszt’s Piano Concerto no. 1, and Jonathon Heyward conducting.

The Spoleto Festival USA Orchestra, Westminster Choir, and Charleston Symphony Orchestra Chorus join forces for a spectacular performance of Beethoven’s Ninth Symphony, in celebration of the 250th anniversary of the master’s birth. The beloved Bank of America Chamber Music series, comprising 11 programs performed three times in the Dock Street Theatre, also includes Beethoven in its concerts— his Septet in E-flat major. Bank of America Chamber Music Director and host Geoff Nuttall has once again organized an eclectic season with a strong roster of returning players and fresh faces; series details will be announced in full in April 2020.

Also running nearly every day of the Festival in the Dock Street Theatre acclaimed director Emma Rice’s Romantics Anonymous. This charming musical, praised by The Guardian as “a multifaceted gem, chock-full of love, generosity and joy,” was adapted by Rice from the French-Belgian film Les Émotifs Anonymes and features lyrics and music by Christopher Dimond and Michael Kooman.

Over final weekend, Charleston sets the stage for Live from Here with Chris Thile, American Public Radio’s popular variety show featuring music, comedy, and audience interaction. More than two million listeners tune in each week; this special broadcast (TD Arena at College of Charleston, June 6) is presented in partnership with the College of Charleston and the support of The ETV Endowment of South Carolina. Popular music offerings presented as part of the First Citizens Bank Front Row series in 2020 include Rhiannon Giddens with Francesco Turrisi (May 24), The Wood Brothers (May 29), and Steep Canyon Rangers (June 3), all in the College of Charleston Cistern Yard. And on Sunday, June 7, The War and Treaty return to Spoleto for the Wells Fargo Cistern Finale—a celebratory evening concert held for the first time at the Cistern Yard and drawing the 44th season to a close.

The full 2020 program, featuring more than 150 ticketed events, can be found here, along with an event calendar. Tickets go on sale to the general public on Wednesday, January 15, at 10 am EST by phone at 843-579-3100 and online at spoletousa.org.

A donor pre-sale begins Monday, January 6. Tickets can be purchased in person through the Spoleto Festival USA Box Office at the Charleston Gaillard Center (95 Calhoun St.) beginning May 1.

Save the Light’s Oyster Roast Scheduled for Sunday