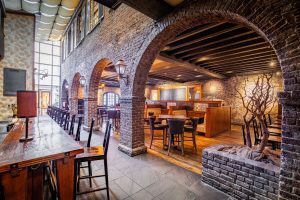 An almost 10,000-square-foot historic property at 2 Unity Alley is on the market for $5.95 million. Formerly McCrady’s Tavern, the listing is being managed by the Charleston Commercial Team of KW Commercial, a local real estate investment firm, and a key player in the downtown Charleston real estate market. The property is also available for lease.

McCrady’s Tavern is nestled in a cobblestone alley just off East Bay Street in the historic French Quarter. The property has long been known as one of Charleston’s favorite fine dining establishments. After many years of success as McCrady’s Tavern, the owner has decided to pass the torch to another Charleston restaurateur.

The three-story building totals 9,431 square feet. The first floor houses a full-service restaurant, including a large bar with warm brick arches and exposed beams. The second floor, known as the “Long Room,” is a 4,025-square-foot open venue with high-end finishes, including fireplaces, Venetian chandeliers and 15-foot ceilings. The third floor is 988 square feet of administrative space and wine storage.

Built in 1779, the property underwent extensive renovations in both 2006 and 2015. It is considered one of Charleston’s oldest and best preserved Revolutionary-era taverns. The building has retained many of its original architectural elements, including the first-floor brick arcade and kitchen hearths, as well as the second-floor Long Room, historically used for significant political gatherings including a dinner for President George Washington in 1791 and theatre performances. The property is protected by a preservation easement, which protects the interior and exterior structure.

“This is such a beautiful and historic property. It will make a wonderful space for a restaurateur who wants to open a second location or start a new restaurant here in Charleston’s rich culinary scene,” said Joshua Schaap, managing director of Charleston Commercial.

Follow us
Related Topics:Charleston Commercial TeamKW CommercialMcCrady's Tavern
Up Next

Patriots Point Kicks off 2020 with “Pay What You Can” Weekend