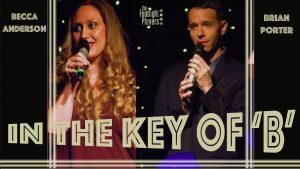 Both two time winners of Charleston City Paper’s Best of Awards for Best Actor and Actress in Charleston, Porter and Anderson have been celebrated throughout the years as two of Charleston’s most versatile and experienced theatre talents. Porter, who is also Footlight Player’s Executive Director, made his debut on the Charleston theatre scene in 2010 playing the title role of Hedwig in Hedwig & the Angry Inch at the American Theatre, a role he will reprise this coming June with What If? Productions. Along the way he has picked up many accolades for his performances as the Emcee in Cabaret, Seymour in Little Shop of Horror, and as one of the murderous duo in Thrill Me, The Leopold and Loeb Story. Anderson too has kept a busy theatre schedule throughout the years with memorable roles such as Little Edie in Grey Gardens, Frau Blucher in Young Frakenstein, and a regular featured artist on the stage with 34 West Theatre Company.

Becca and Brian, the titular ‘B’s of the cabaret show’s title, surprisingly have never shared the stage opposite each other in a regular musical and have only performed together live a couple of times, most recently in What If? Productions’ Carol of the Belles holiday piano bar. The two will perform an intimate collection of some of their favorite Broadway and standard tunes along with sharing some stories behind the music and their experiences in the world of theatre.

Accompanied only by piano and welcoming a handful of special guests, Porter and Anderson hope their new cabaret show will inspire music and theatre lovers throughout Charleston as they help Footlight Players and Queen Street Playhouse launch the Queen Street Music Series with their first show of the New Year with In the Key of B.