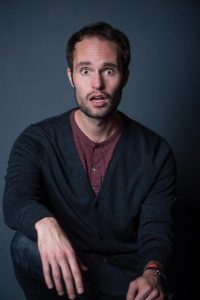 In preparation for comedian Blake Wexler’s stand up show this Monday (December 30, 2019 at 8:30 pm) at The Tin Roof in West Ashley, he put together a heavily researched, data-driven list of why going out on New Year’s Eve’s Eve is more fun than celebrating on December 31st.
5. New Year’s Eve’s Eve Has No Countdowns.
Counting is objectively one of the most difficult things we do as human beings. There are an infinite amount of numbers. How the hell are we supposed to remember what order they all go in? And then you expect us to be able to count BACKWARDS, at MIDNIGHT, after DRINKING ALL DAY? Absurd.
4. No Uber/Lyft Pricing Surges.

“Hi, yes, may I please spend $450 on an eleven minute ride while I sit in the back of a stranger’s Honda Civic as he talks my ear off about his candle making business?” By the way, one day I ordered an UberX, and a guy picked me up in a Tesla. A $75,000 car. I swear to God this is a true story. I got in, and before I could open my mouth to say hello, the driver says, “I have only one rule: don’t ask me about my Tesla.” The ride was completely silent after that because other than their pending divorce, the only interesting thing about people with Teslas is their Tesla.

3. More Bang for that Buck.

New Year’s Eve itself is always rife with over-priced cover charges and annoying crowds. Same goes for all the other major drinking holidays, St Patrick’s Day. 4th of July. Earth Day. Especially Earth Day. Want to wait in a massive line of 30 hippies to hug a tree on April 22? Didn’t think so. Turn that Weeping Willow’s frown upside down on April 21st like an intelligent adult.

I’ve been banned from using most major search engines, but I’m fairly sure that thousands of people are killed in ball drop related incidents each year. Ever notice that it’s the two biggest, strongest players that partake in the ball drop at center court at the beginning of basketball games? That’s not strategy. It’s safety.

No sparkly dresses. No ill-fitting blazers. Wear whatever you want. My show is literally occurring in a place called “The Tin Roof.” You could probably get away with not wearing shoes if tetanus wasn’t such a concern – wait…is that really how you spell tetanus? Also I’m totally kidding please don’t cancel the show The Tin Roof is the best, their drinks are great, their food is great, the two Charleston comedians opening are great, and I am extremely underrated. Please wear shoes.

Blake Wexler started doing stand-up at the age of 15 in Philadelphia, then moved to Boston in 2007 to pursue his comedy career and attend Emerson College.
While at Emerson Blake was named as one of the funniest college students in the country at The Rooftop Aspen Comedy Festival two years in a row, and after graduating with degrees in journalism and political science he moved to Los Angeles.
Since moving to LA, Blake has written for and appeared on Comedy Central, was a featured performer in numerous comedy festivals, became the first comedian/writer to appear on ABC’s “Watch Party: The Bachelor,” and can be regularly heard on The Cracked Podcast, The Daily Zeitgeist, & The Todd Glass Show.
Blake’s critically acclaimed stand-up comedy recordings The Blake Album (2016) and Stuffed Boy (2018) debuted at the top of the iTunes charts, and his recent album 12 Years of Voicemails from Todd Glass to Blake Wexler was #1 on iTunes & Amazon.