For those who know me, I absolutely love the style of pizza I grew up eating. Having been reared in Jersey in the 1960’s & ’70’s I became accustom to New York thin sliced pizza. As a kid I ate it several times a week, and even today I crave the few low country pizzerias who cater to my particular pizza taste.

Pizza like many foods is subject to what you’re familiar with. People raised in the south or along the Pacific coast have a different view of pizza altogether. While some enjoy chain pizza, others have embraced what I call gourmet or designer pizza. No one is right when it comes to the pizza they enjoy, it’s just a matter of preferred taste buds.

While there are several NY style pizzerias dotting the low country landscape, and a plethora of national chains strewn throughout greater Charleston, only a few independents offer something different from the norm. That brings me to Zavarella’s Pizza located at 1937 Clements Ferry Road, just a few minutes off I-526.

Zavarella’s motto is ‘it’s good to be square’ which might automatically conjure up images of Detroit style pizza, which caters to a thicker square pan type of pizza. But to the contrary, the square pan is all Zavarella’s and Detroit have in common.

Named after owner Nick Mead’s paternal godfather Ettore ‘Papa’ Zavarella’, Zavarella’s Pizza is what Nick describes as ‘grandmother’s pizza’, a thin crusted, crispy Silician square pan pizza that is prevalent throughout the greater Ohio River Valley region of the mid-west. It’s a style of pizza familiar to those who grew up parts of Ohio, Indiana, Michigan, and West Virginia. 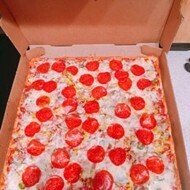 Although pizza is Zavarella’s main attraction, they do serve up several sides with Italian heritage. Papa’s Home-made Meatballs with house marinara are well worth the $7.99 appetizer price. Their Pepperoni Rolls recently won Second Place Overall in the Lowcountry Mountaineer Pepperoni Roll Contest. Not bad for an eatery in business less than one year. 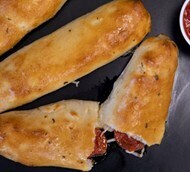 You can get an oversized stuffed bread stick with any of your favorite meats. Italian sausage and or steak, wrapped inside a warm garlicky buttered bread stick oozing with provolone cheese. Served with your choice of popular dipping sauces, but trust me their home-made marinara is the best choice.

Zavarella’s offer up three options for Between The Bread menu items, ie a Baked Sandwich, the old school submarine sandwich, or a calzone. A half dozen signature sandwich options as well as a create your own, which allows for your choice of meats, cheeses, and veggies.

Aside from a few salads and a soup of the day, Zavarella’s overall focus is pizza. You can get pizza by the slice or a whole or half tray. They offer up several signature pizzas including the more familiar pepperoni, meat lovers & supreme, as well as the Hawaiian and a Veggie Pizza. They may be square but Zavarella’s is hip to many tastes and dietary needs.

With Clements Ferry growing rapidly along the stretch between I-526 and Hwy 41, there is a need for more food & drink options, as well as a variety of food options. That is exactly what Zavarella’s is providing. They are bringing Ohio River Valley pizza to the low country and have set up camp in on the fastest growing areas of greater Charleston.

Prices are fair given the quality of food they provide. Sandwiches and calzones range from $7-$12. A half tray (8 slices) of pizza begins at $12. You can get a dozen wings for the same $12 price. If you work or live in the Clements Ferry Road area drop in for lunch, and for $7 enjoy four square slices with one topping and a fountain drink. I would call that an affordable meal.