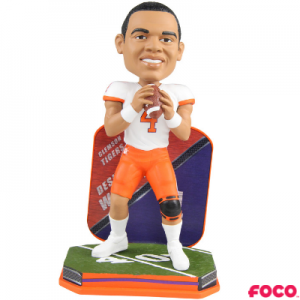 Wearing No. 6, the Hopkins bobblehead is catching a pass at the 40-yard line, while the Watson bobblehead, wearing No. 4, is holding the ball and looking to pass at the 40-yard line. Hopkins is wearing an all-white uniform and Watson is wearing a white jersey with orange pants. The former Clemson stars are now teammates for the Houston Texans, where the pair has helped lead the team to the top position in the AFC South standings with a 9-5 record. Wearing his familiar No. 7 and decked out in the Garnet and Black for the Gamecocks, Clowney’s bobblehead features the defensive end poised to get after the quarterback.

Each bobblehead is individually numbered, and they are only available through the National Bobblehead Hall of Fame and Museum’s Online Store. The bobbleheads are $40 each, including a flat-rate shipping charge of $8 per order, and orders placed by December 19th will be delivered before Christmas.

Hopkins, a wide receiver for Clemson from 2010-12, amassed 206 receptions for 3,020 yards and 27 touchdowns in three seasons with the Tigers. Selected in the first round by the Houston Texans in the 2013 NFL Draft, Hopkins has been one of the league’s most productive pass catchers. The three-time Pro Bowler and three-time All-Pro entered this season with 528 receptions for 7,437 yards and 47 TDs.

Watson (top right), a quarterback for Clemson from 2014-16, guided the Tigers to the national championship in 2016 when he was the runner-up for the Heisman Trophy. In three seasons with the Tigers, Watson passed for 10,168 yards and 90 TDs and rushed for 1,934 yards and 26 TDs. Selected in the first round by the Houston Texans in the 2017 NFL Draft, Watson has developed into one of the game’s best young quarterbacks and was named to his first Pro Bowl in the 2018 season. 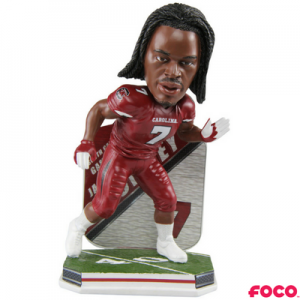 Clowney (bottom right), who played for South Carolina, from 2011-13, collected 24 quarterback sacks and 47 tackles-for-loss in his three seasons with the Gamecocks. A unanimous All-American as a sophomore, Clowney began his junior season as a frontrunner for the Heisman Trophy. Selected first overall by the Houston Texans in the 2014 NFL Draft, Clowney played five seasons in Houston and made three Pro Bowls before being traded to the Seattle Seahawks prior to the 2019 season. The 6-foot-5, 255-pound Clowney has recorded 30 sacks and seven fumble recoveries in his professional career.

“We are excited to release these bobbleheads recognizing the sensational careers of three current NFL stars who played collegiately in South Carolina,” National Bobblehead Hall of Fame and Museum co-founder and CEO Phil Sklar said. “All three were very special college players who have went on to excel at the highest level and we think fans will love these new bobbleheads.”

About FOCO:
FOCO is a leading manufacturer of sports and entertainment merchandise celebrating more than 20 years in the industry. The company’s always-growing product lines includes apparel, accessories, toys, collectibles, novelty items, and more. FOCO is licensed with all major sports leagues including the NFL, MLB, NBA, NHL, NASCAR, MLS and over 150 colleges and universities as well as entertainment properties such as Disney, Warner Bros/DC Comics, Nickelodeon and WWE. Please reach out to Matthew Katz, Licensing Manager, P 848-260-4315 – mkatz@foco.com for more information. Follow @FOCOusa on Facebook, Twitter, and Instagram for more exciting news and new product releases.

Children’s Museum of The Lowcountry Receives $100,000 Donation from Dominion Energy