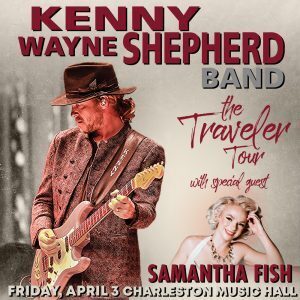 For the last quarter-century, riding shotgun with Kenny Wayne Shepherd has been the greatest road-trip in rock ‘n’ roll. Gone is the young Louisiana gunslinger who erupted onto the early-’90s scene with his burn-it-down guitar solos and gut-punch songcraft. The man he’s become is even more magnetic, still pushing his Fender Strat where others fear to fret, while diving deep into human truths and personal evolution with an honesty that only comes with miles on the clock.   If that quarter-century journey has taught Shepherd anything, it’s that there’s no such thing as mission accomplished.  A restless creativity has driven Shepherd ever since he taught himself to play guitar at the age of 7.  A musician in constant motion, Shepherd has spent his career burning up the highways and crossing continents, bringing his unique style of rock/blues to the world. Public On-Sale begins Friday, December 20th at 10AM!

Like all the great songwriters, Shepherd’s studio catalogue has always been the best way to get to know the reserved musician. His path was set from childhood, as he copped the licks from the records brought home by his radio DJ/Program Director father and was sent reeling from a “life-changing” meeting with Stevie Ray Vaughan to make his own stage debut at the age of 13. With early albums like his Platinum selling Ledbetter Heights, his Platinum selling Trouble Is…, his Gold selling Live On and The Place You’re In, the blues-rock scene hailed its most honest new songwriter and guitar hero with a plethora of awards including two Billboard Music Awards, two Orville H. Gibson Awards and two Grammy nominations.  Shepherd continued writing, recording and touring, chronicling the highs and hard times, while dousing his shows with guitar pyrotechnics. “The first five years of my career,” he remembers, “I was on tour non-stop. I’d probably go home for two weeks a year.”

The year 2007 brought the ambitious Platinum selling DVD/CD project 10 Days Out: Blues from the Backroads, for which Shepherd received two more Grammy nominations.  In the documentary, he and his band traveled throughout the American South to record with such blues icons as B.B. King, Clarence “Gatemouth” Brown, Hubert Sumlin, Pinetop Perkins and David “Honeyboy” Edwards.  2010 saw the release of Shepherd’s long-awaited first live album, Live! In Chicago, recorded at Chicago’s House of Blues during the all-star Legends tour supporting 10 Days Out. The live disc debuted at #1 on Billboard’s Blues chart, marking the 5th time he had a #1 debut as well as receiving yet another Grammy nomination.

In 2011, the now seasoned performer and songwriter stopped off to release the acclaimed How I Go and in 2013, Shepherd became one-third of blues-rock supergroup The Rides, with legendary veterans Stephen Stills (Crosby, Stills & Nash) and Barry Goldberg (Electric Flag).  The Rides toured extensively, and have released two acclaimed albums, Can’t Get Enough and Pierced Arrow, that further illuminate Shepherd’s depth and proficiency as a songwriter, guitar player and now vocalist.

In 2014, the rocket-fueled collaboration covers album, Goin’ Home was introduced and 2017 saw the release of Lay It On Down which was followed by 2019’s The Traveler, which reaches across the battle lines of a planet that has never been so divided and showcases Shepherd’s ever-evolving songwriting. The Traveler also marked the 8th time Shephed had a release debut at #1 on the Billboard Blues charts.