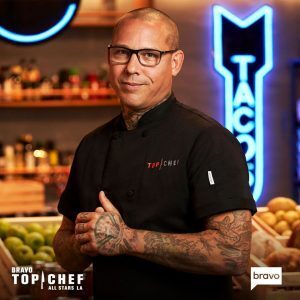 Bravo’s Top Chef last week announced the cast of Season 17 – “All Stars LA” including 5Church partner Chef Jamie Lynch. The latest season will feature 15 finalists, front runners, and fan favorites from seasons past who have all returned to finish what they started and battle it out for the coveted title.

Chef Lynch previously competed in the show’s 14th season, which was filmed in the Charleston area and aired in late 2016/early 2017. Lynch finished ninth after opting to give up his immunity following a challenge. If he had kept the immunity, Chef Lynch would have been safe from elimination, but after a poor showing in a team challenge, he said he didn’t deserve it.

Will Chef Lynch be able to stave off elimination this time? You’ll have to watch to find out! His journey begins on March 19th.

The Season 17 All Stars are:

Click here for more info about the upcoming season.
–