Veteran Comic Among Those Appearing At Kiawah Comedy Weekend 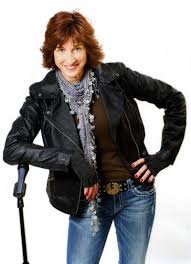 Not unlike many stand up comedians, veteran funny lady Julie Scoggins had to while away doing less glamourous jobs until she found her comedic purpose in life. “I did a variety of jobs over the years until comedy came along. The weirdest job was climbing telephone poles for cable vision. I lasted one month. Never made it out of training. They didn’t use a bucket truck, we had to wear spikes to climb the poles. I learned quickly it wasn’t going to be for me.”

Just out of high school in the late 1970’s Scoggins worked for few summers in the glamourous world of semi-pro baseball. “I was the bat girl for the Charlotte O’s. They were a farm team for the Baltimore Oriole’s, but they called them the O’s back then.”

She got the position in a rather un-orthodox way. “My mom had sent me to modeling school. I think she thought I wasn’t feminine enough, and modeling school would help with that. Sadly it didn’t work out, probably because I have to much tomboy in me. Anyway the O’s came to the school looking for a half dozen girls to work for the ball club. We we sponsored by Dr. Pepper and called the ‘Pepper Girls’.”

During her third summer with the O’s she took on another role. “Even though they were technically the Oriole’s, the mascot for the team was ‘Hot Doggie’, a big blue dog. My last year with the team I was the mascot. There was mesh where the mascots mouth was, and that’s how I could see. I cut the mesh out and was able to maneuver a mouthpiece for an instrument I played in high school. So I’d dance around playing my instrument, and just had fun with it. Maybe that was my first foray into comedy.”

Scoggins claim to fame while working for the Charlotte O’s. “I got my picture taken with the San Diego Chicken.”

It wasn’t until she was 37 years old that Scoggins realized making audiences laugh for a living was her true calling. She lists the original first lady of comedy, Phyllis Diller as an inspiration. The legendary comedian began her career at age 37 in 1954. “I’m 59 so I grew up watching Phyllis Diller on television. I remember how funny and outrageous she was. When I was younger I had no idea stand up comedy was on my radar, but recalling the greats like Diller helped me early on.”

Scoggins and her husband were living in the Virgin Islands for many years, before moving back state side in 1997. “I didn’t want to come back, but he was adamant. So we came back and said, we’ll take a two month camping trip, travel across the country and see where we want settle down. We went all over the place including California, dropping in all the comedy clubs just because, and we were being adventurous.”

Like many stand-ups, Scoggins comedy light bulb came on at a nightclub. “We were at a show one night I said to my husband, ‘I might like to try this’. He said you’re funnier than most were seeing out here. So I began to observe stand-ups. We were back in Charlotte at the time, and we’d go to these open mikes nights, and see the same guys over and over again. They’d all do the same bit, without new material. I told myself there had to be a better way.”

She adds, “I wrote for a while, and then did an open mike night. It went over pretty well, so I sensed I had finally realized my true calling in life. That was 1997, and now I’m heading into my 23rd year of doing stand up.”

While honing her craft in her formative years, Scoggins had a method to her madness, and a familiar sounding board. “I went to as many open mike nights as would have me. We recorded all my sets. I have a friend of my mine who would watch the videos with me while we would drink some wine. She would critique my work and gave me very useful suggestions. That helped me with stage presence and overall delivery.”

More than two decades later Scoggins has become a regular on the comedy club circuit. She competed in Season 9 (2015) of NBC’s ‘Last Comic Standing’, and has been a frequent guest on the syndicated radio program ‘John Boy & Billy Big Show’ broadcast out of Charlotte. “I’ve kept busy.”

Scoggins may not be a household name but she loves going to work. “I haven’t set the world on fire yet, but comedy pays the bills. At least I’m not climbing poles for a cable company. I love what I do. I love making people laugh. I’ve got nothing to complain about.”

What is the underlying theme to her brand of comedy. “For me it has to be relatable. Plus it’s about timing and knowing your audience. I can do a G-rated or R-rated show. I do cruise ships where they have different times for different age audiences, so I’ve become very versatile with my comedy.” Scoggins admits to having performed for a black family reunion and a pastor’s 40 birthday party. “You have to know your audience.”

Scoggins is among a few comedians who stray away from political humor. “There are enough comics doing that.” Where does she find her funny. “My experience is that the best comedy comes from irony. You can find that all around you.” She keeps her mind on alert status all the time. “I’m in a habit of constantly writing notes. You never know what’s going to be funny. But if it’s funny to me, than usually audiences can relate to it.”

Wedded bliss has provided some comedic routines for Scoggins. “I guess being married so long, there are just some things you’re not going to fix. Let’s face it men are so stinking funny.” She only uses husband humor on occasion. “Again it’s all about timing. I prefer to break it up. I have some classic material I pull out every now and then, but my hope is to provide new material for those who have seen me in the past.”

One of her classic bits pulls from real life and the couples bedroom antics. “We’ll be fooling around and he’ll say something like ‘who’s your daddy’. Of course I’m an adopted kid, so I’ll have to answer ‘I don’t know, I’m adopted. I’m just trying to keep up here. Now we’re going to have to start all over again.”

Her comedy may be ever evolving but Scoggins does have a preferred setting. “I’ve played cruise ships and larger halls, but I really love the clubs. I love a room with a smaller ceiling and one where the audience is close. It’s much more personal for me if I’m playing a smaller club.”

While some comedians feed off banter from the crowd, Scoggins would rather control the pace of her show. “I don’t encourage or invite back and forth from the audience. That works for a lot of comedians. It’s not what I do best. I do my best not t get sidetracked. I have my own rhythm, and I’m out hopefully to make everyone laugh. That’s my overall focus.”

Phyllis Diller may have been one of her early icons, but Scoggins does find several contemporaries quite funny. “I totally enjoy Paula Poundstone and Kathleen Madigan. Truth is, there are many good females comics working today, I’m just glad to be part of the club.” Veteran and legendary stand up comedian Jackie Mason says Scoggins is an amazing talent. 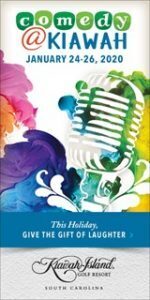 Scoggins will take part in the sixth annual Kiawah Comedy Weekend, happening Fri-Sun January 24-26 at the Sanctuary at Kiawah Island Resort. “I’m looking forward to it.” Two nights of good, clean, nonstop laughter with nationally acclaimed comedians. Your weekend emcee, Jeff Jena, will be here to introduce each comedian with his own humor.

Headliners include Moody McCarthy and Ryan Conner, as well as featured comedians Scoggins, Kermet Apio, Matthew Broussard, and Erin Jackson. Shows will start at 8:00pm Friday night with table seating each night and a special Q&A Coffee With the Comics Saturday morning. Must be 18 years or older to attend shows. Full info at https://kiawahresort.com/packages/signature-events/comedy-weekend/

Scoggins message to America. “Life is funny. Just laugh and be thankful. There is funny all around us.” For more about Julie Scoggins visit her website at http://juliescoggins.com/