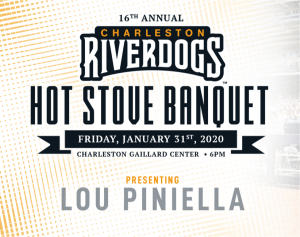 One of the most decorated managers in Major League history and a three-time World Series champion, former Yankee outfielder Lou Piniella, will be the featured guest speaker at the RiverDogs’ 16th Annual Hot Stove Banquet & Auction. This year’s event will take place on Friday, January 31st at 6 pm at the Gaillard Center.
Piniella, who spent 23 seasons on a Big League bench including a World Series-winning season with the Reds in 1990, will sign autographs, pose for pictures, and deliver a keynote address as part of the evening’s festivities.
One of the most accomplished managers in baseball history, his 1,835 career managerial wins combined between the Yankees, Reds, Mariners, Rays, and Cubs rank 16th  of all-time. A testament to his longevity as well as success, he is one of just eight Major League skippers to be named Manager of the Year at least three times, twice with the Seattle Mariners (1995 & 2001) and later in the National League with the Cubs in 2008. During the historic 2001 season, the Mariners set a still-standing American League record with a 116-win campaign.
Prior to his career from the bench, Piniella spent parts of 18 seasons in The Show as a player, most notably with the Yankees whom he spent the final 11 years of his career and won a pair of World Series titles (1977 & 1978). A Rookie of the Year season with the Royals in 1969 sparked a career in which the Tampa, Florida native batted .291 with 102 homers, 766 RBI, and a .741 OPS in over 1,700 games in The Show.
The evening will open with a cocktail hour and silent auction that includes baseball memorabilia from past Hot Stove speakers, collectibles from RiverDogs Director of Fun Bill Murray, vacation packages, and more, beginning at 6 pm. A program, including addresses from the Citadel, Charleston Southern, and College of Charleston head baseball coaches, and the keynote speaker concludes the evening.
The Hot Stove Banquet has become one of the most highly anticipated offseason events hosted by the RiverDogs each year. Past speakers have included Hall-of-Famers Bobby Cox, John Smoltz, Tom Glavine, Ryne Sandberg, Wade Boggs, and Goose Gossage.
Individual tickets to the Hot Stove Banquet are $90 and can be purchased online at rileyparkevents.com. Groups can reserve a table of eight for $750 and a table for ten at $900 by contacting the RiverDogs Special Event Department at (843) 577-DOGS (3647).
Previous Hot Stove Speakers
2019 – Johnny Damon & Justin Smoak
2018 – Andruw Jones & Ryan Klesko
2017 – Tom Glavine
2016 – Ryne Sandberg
2015 – Goose Gossage & Brett Gardner
2014 – Phil Niekro & Javy Lopez
2013 – Wade Boggs
2012 – John Smoltz
2011 – Bobby Cox
2010 – Dale Murphy
2009 – Gaylord Perry
2008 – Jeff Francoeur
2007 – Tommy John
2006 – Jim Bouton & Johnny Blanchard
2005 – Bobby Richardson & Dallas McPherson
–
Press Release