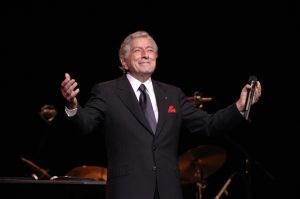 The Charleston Gaillard Center today announced that Tony Bennett, the 19 time Grammy Award-winning musician whose music spans over six decades, will perform at the venue on February 11th, 2020.

At the age of 93, Bennett is not slowing down and 2020 will mark the 70th Anniversary of his professional recording career when he made his first album, Boulevard of Broken Dreams in 1950 as a newly signed artist to Columbia Records. His most recent recording, with long-time friend and musical colleague, Diana Krall, Love is Here to Stay topped the jazz charts upon its debut and was just nominated for a Grammy Award. The album celebrates the music of the Gershwins and includes the jazz standard, “Fascinating Rhythm,” which Bennett and Krall perform as a duet. The inclusion of the song on the new album, was the impetus for a Guinness World Record title for Tony Bennett, who in 1949, under his stage name of Joe Bari at the time, made his very first recording of the Gershwin standard.

In 2017, the Library Of Congress presented Bennett with The Gershwin Prize marking the first time that an interpretive singer has been honored. The event was broadcast on PBS Nationally and featured tribute performances by Stevie Wonder, Josh Groban, Michael Buble, Gloria Estefan and many others. His signature song, “I Left My Heart In San Francisco,” was inducted this year in the National Recordings Registry.  Bennett’s sixth book, Tony Bennett: On Stage and In the Studio, was recently published and provides an insightful look into Tony’s illustrious recording career highlighted by an extensive array of photographs, memorabilia, and artwork.

Bennett’s daughter, Antonia Bennett has been touring with her father and will open the performance with a collection of jazz/pop standards. Antonia Bennett is a graduate of the prestigious Berklee College of Music.

Tickets for the concert go on sale Friday, December 13th, 2019 at 10 am. Prices range from $55-$178 (plus applicable fees). Members receive pre-sale access. You get pre-sale access by becoming a Charleston Gaillard Center Member. Contact their Development Office at development@gaillardcenter.org or (843) 579-6468 for more information.