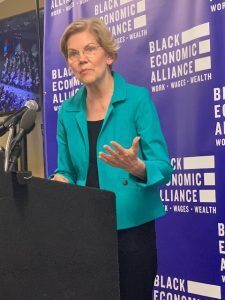 The event will take place in the Johnson Center Gymnasium at 30 George St. at 3:15 pm. Doors open at 2 pm. This event is free to attend and open to the public. Please note that CofC has a clear bag policy for this event and only clear bags will be allowed in the building.

Warren graduated from the University of Houston with her bachelor’s degree in speech pathology and audiology. She earned her J.D. from Rutgers School of Law. She worked as a law professor for more than 30 years and taught courses on commercial law, contracts and bankruptcy. In 2012 she was elected to the U.S. Senate, becoming the first woman to be elected U.S. Senator from Massachusetts. She won re-election in 2018.

The mission of the Bully Pulpit Series is to encourage and facilitate political participation throughout the College of Charleston community by providing a platform for dialogue with our nation’s leaders. At its core, the series engages today’s youth by meeting students where they are – in the classroom, outside their residence halls and through their social networks – to create curious, informed and engaged individuals who are ready and able to engender political and social change.

As an effort of the College of Charleston Department of Communication and Department of Political Science, the Bully Pulpit Series gives young voters the opportunity to become involved in the political process as well as the issues that affect their communities.