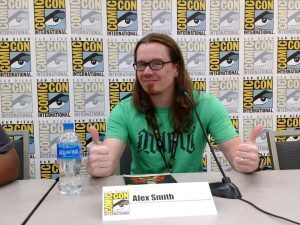 The second Summerville Comicon will be held on Saturday, December 7th at the Coastal Center (9995 Miles Jamison Rd.) in Ladson. The event will run from 10 am to 6 pm and will be held in the building’s gymnasium.

Featured guests include Charleston comic artist Alex Smith (right). He is internationally known for his work and has been a featured guest at Comic-Con International in San Diego. In addition, representatives from Vindicated Entertainment will be on hand demonstrating and representing their hit game SpellSlingers. Other featured artists include Melissa Pierce, Ernie Suggs, Barringer Fox Wingard III, Zack Somov, Bedlam 57, and Apen. Members of the current cast of Rocky Horror Picture Show community in Charleston will also be on hand.

A special live podcast will be featured at 1 pm from the cast of Murder123.com. Plus, Robin McCray and Janice Carter, well-known Bigfoot researchers, will give a talk on finding and communicating with Bigfoot.

For more information, visit www.SummervilleComicon.com or e-mail Dr. John Stamey at jwstamey@gmail.com. A portion of the proceeds will benefit the Coastal Center.