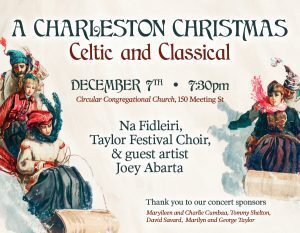 The Taylor Music Group (TMG), a leading Charleston arts organization focused on the blending of classical and folk music, announces its annual popular Holiday concert “A Charleston Christmas: Celtic and Classical.” The concert will be performed on Saturday, December 7 at 7:30 pm at Circular Congregational Church, 150 Meeting Street.

Na Fidléirí and the Taylor Festival Choir (TFC) will perform a mixture of traditional holiday carols, instrumental jigs with a Celtic flavor and spiritual choral segments. Led by Mary and Robert Taylor, Na Fidleiri and the TFC will be joined by Joey Abarta on the Uilleann pipes.

“We are excited to continue to combine traditional classical Christmas music with Celtic folk music to celebrate the Holiday Season,” says Robert Taylor, Founding Director and Conductor of the Taylor Festival Choir. “The Holidays are about family, and the group of people we annually perform with have truly become like family. The Na Fidleiri kids and their parents, the singers in the Taylor Festival Choir—many of whom have sung together for 15 years now–all really care for each other. We are especially excited to welcome our guest artist, Joey Abarta, into this musical family.”

Tickets for the Charleston concert are $25 general seating and $35 preferred seating and $10 students. Tickets can be purchased at www.tmgcharleston.com.

Joey Abarta has spent the last sixteen years touring North America, Europe, and Asia, teaching and performing music on the uilleann pipes, the Irish bagpipe. A Los Angeles native, he first received instruction on the pipes from Dubliner Pat D’Arcy, a founding member of the Southern California Uilleann Pipers Club. His musical skills have been further honed by several visits to Ireland, a year-long stint working in Japan, and continuing relationships with master pipers. In August of 2009, Joey’s accomplished playing won him an All-Ireland championship, placing second worldwide at the Fleadh Cheoil na hEireann. In the fall of 2014 Joey won first prize at the An tOireachtas, becoming the the first American uilleann piper to do so since 1969. In 2015, Joey was honored to be a recipient of a traditional arts apprenticeship from the Massachusetts Cultural Council meaning he was awarded a grant to teach his art to the next generation. Currently based in Boston, Joey divides his attention between performance, teaching, and recording. In addition to performing solo, he performs with Nathan Gourley of “Life is all Checkered” fame and had toured with Mick Moloney and the group The Green Fields of America; while at home, he organizes the meetings of the Boston Pipers Club, teaches for Comhaltas’ Boston Music School, and organizes various traditional music concerts and events.