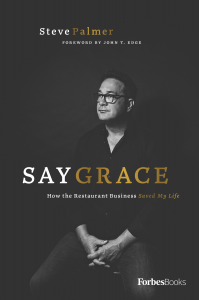 Local restaurateur Steve Palmer this week announced the release of his debut memoir, Say Grace: How the Restaurant Business Saved My Life. Published by ForbesBooks, Say Grace shares the story of Palmer’s descent into substance abuse, his journey to sobriety, and how the industry that broke him ultimately saved his life.

Named a 2019 Forbes “Small Giant” earlier this year, Palmer founded The Indigo Road Restaurant Group 10 years ago which is now made up of 20 restaurant and hospitality concepts across the Southeast and up to D.C.. Prior to his success as a restaurateur, Palmer experienced a troubled childhood.

After a series of traumas in his childhood and teenage years, including the death of his father and grandfather, Palmer began drinking and smoking pot at the age of 11. He was eventually sent to a series of rehabs and halfway houses before ending up on the streets where drugs and alcohol soon became a way of life. Years later, after finding acceptance in the restaurant industry and as his professional career took off, Palmer had to learn how to be sober in an industry awash with alcohol and drugs. Thanks to coworkers that were able to love him when he couldn’t love himself, he was forced into treatment, got sober, and escaped addiction alive. Palmer’s first-hand account of addiction, isolation and redemption in Say Grace aims to inspire others like him to find healing and recovery in an industry that struggles with the highest rates of alcohol and drug abuse.

The book has already received praise from Palmer’s fellow industry leaders, mentors and media. “Say Grace is a powerful and moving reminder that people are the heart and soul of our industry, and that taking care of each other is our first – and most sacred – responsibility,” Danny Meyer, Founder and CEO of Union Square Hospitality Group, said.

Led with a foreword by John T. Edge, director of the Southern Foodways Alliance at the University of Mississippi, Say Grace explores the duality of the hospitality industry from Palmer’s perspective as a recovering addict and alcoholic. As food and beverage professionals face the harsh reality of addiction and substance abuse among their peers, sobriety is becoming more and more commonplace in the industry. In 2016, Palmer founded the nonprofit organization, Ben’s Friends, soon after his friend and chef Ben Murray committed suicide after struggling with addiction. The support group was created to help end the stigma and serve as a pathway to hope, fellowship and sobriety for those in the hospitality business struggling with substance abuse. Since its inception, Ben’s Friends has grown into a nationally recognized support group with chapters in Atlanta; Charleston; Asheville, Charlotte, Raleigh, Richmond, Portland, Columbus, Ohio; Austin, Texas.; and Seattle.

Palmer’s work with Ben’s Friends has given him the opportunity to host a TedX Talk and to contribute to the ongoing dialogue of addiction in the restaurant industry through articles in The New York Times, Food & Wine, Los Angeles Times and USA Today. Palmer is a two-time James Beard Award semifinalist for “Outstanding Restaurateur” and has presented at the Southern Foodways Alliance Symposium, TedX Charleston, Charleston Wine + Food Festival and more. Palmer’s establishments, including noteworthy concepts Oak Steakhouse, O-Ku, The Macintosh and Indaco, have drawn praise from Bon Appetit, Esquire, Garden & Gun, Saveur, Southern Living, The New York Times, The Wall Street Journal, and Every Day with Rachael Ray, among others.

Say Grace is now available on Amazon. For more information about Palmer and his book, click here.
–