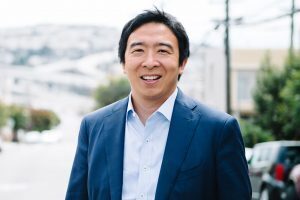 The event will take place in the Stern Center Garden at 71 George Street at 10:30 am. This event is free to attend and open to the public. You can RSVP here; RSVP is for headcount only; this is not a ticketed event.

Andrew Yang graduated from Brown University with his bachelor’s degrees in economics and political science. He earned his J.D. from Columbia University Law School. He began his career as a corporate attorney at Davis Polk & Wardwell in New York City. Soon thereafter he left the legal field and launched a dot-com, Stargiving, a website for celebrity-affiliated philanthropic fundraising. For the next 5 years, he continued work in start-ups, and in 2006 he was named CEO of Manhattan Prep, a test preparation company, which would later become Kaplan. In 2011, he founded Venture for America (VFA), a nonprofit fellowship program that created jobs in struggling areas across the nation. President Barack Obama’s administration named Yang a “Champion of Change” (2012) for supporting startups and entrepreneurs through his work at VFA and a “Presidential Ambassador for Global Entrepreneurship” (2015).

As an effort of the College of Charleston Department of Communication and Department of Political Science, the Bully Pulpit Series gives young voters the opportunity to become involved in the political process as well as the issues that affect their communities.

Follow us
Related Topics:Andrew YangBully Pulpit Seriescollege of charleston
Up Next