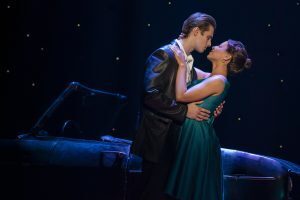 Reserved seat tickets go on sale Monday, November 18th at 10 am and are available online at Ticketmaster.com or at the North Charleston Coliseum Advance Ticket Office. For groups of 10 or more, call (843) 529-5007. The show is part of the “Best of Broadway” series.

A Bronx Tale premiered at the Tony Award–winning Paper Mill Playhouse to critical and popular acclaim in Spring 2016. A Bronx Tale opened on Broadway at the Longacre Theatre on December 1, 2016, following previews from November 3. The show ended its Broadway run on August 5, 2018, having played 700 performances and as the second longest running show in the history of the Longacre Theatre.

Based on the one-man show that inspired the now classic film, this streetwise musical takes audiences to the stoops of the Bronx in the 1960s—where a young man is caught between the father he loves and the mob boss he’d love to be. Featuring an original doo-wop score, this is a tale about respect, loyalty, love, and above all else: family.

A Bronx Tale evolved from the one-man Off-Broadway play, A Bronx Tale, written and performed by Chazz Palminteri in 1989. During the original Off Broadway and subsequent Los Angeles engagements, Robert De Niro came to see the show, and brought the story and star Palminteri to the screen in 1993, making his film directorial debut in the process. Following the success of the film, Palminteri performed the one-man show A Bronx Tale on Broadway in the 2007-2008 Season.

Children’s Museum of the Lowcountry to Host Multicultural Holiday Extravaganza